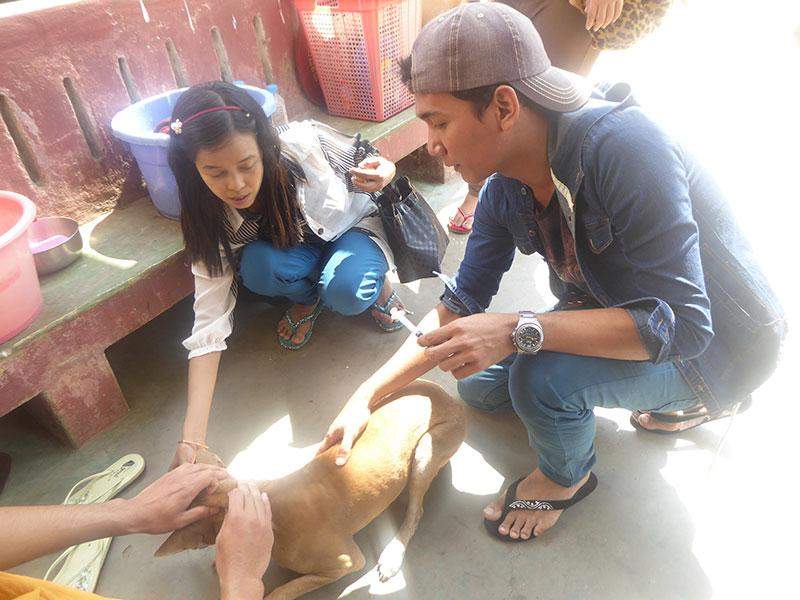 Yangon City Development Committee plans to carry out free vaccination against rabies and birth control of stray dogs in the northern Yangon in early April, according to Dr Hla May Oo, one of assist heads from YCDC.
“The project aims to reduce people’s death rate caused by rabies and to create a rabies free city as well as to control the amount of strays on the streets,” the assistant head of Veterinary and Slaughter House Department said in an interview with the Global New Light of Myanmar on Friday.
Since mid-2014, the YCDC has launched its project at the four corners of the city. Over 300 stray dogs are vaccinated against rabies so far, most of them in South Dagon Township.
At the same time, the YCDC also carry out its former method of clearance of stray dogs with poison-laced meats in 33 townships in Yangon at night, Dr Hla May Oo said. Local dog lover’s groups are planning to submit their draft proposal to the YCDC, the city mayor, health department and veterinary science this year, Daw Thuza Wai, leader of Animals Protect Organization, a local non-profit organization, said. The draft proposal mainly includes replacing method of birth control in dogs to the old one, animal rights and the demands for lands to open dog shelters, she added. Currently there are three dog shelters in Yangon.
“People also prefer the birth control of dog population rather than the culling,” said Dr Hla May Oo.
Myanmar’s neighbours including Indonesia practice method of birth control in dogs.
More than 95 percent of rabies-related human deaths occur in Asia and Africa. According to the World Health Organization, a person dies every 15 minutes by rabies disease around world. Myanmar stands first in the death rate caused by rabies in ASEAN.