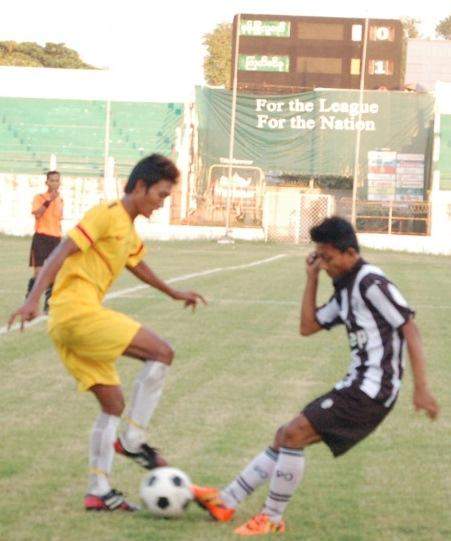 Mandalay, 24 Nov —The first round matches of the 2014 Yadanabon FC Chairman Men’s Open Inter-Club Football Tournament kicked off at Shwe Mann Taung Ground, Aungmye Mandalar Sports Ground and Bahtoo Stadium in Mandalay on Sunday.
At Bahtoo Stadium, Galaxy beat Nan Myo Youth 1-0. Thamudaya Maung thrashed No Two 5-2 in Aungmye Mandalay Sports Ground.
A total of 27 football clubs including the Sports and Physical Education Institute (Mandalay) are participating in nine groups.
The second-round knockout matches will be held from 7 to 17 December at the designated venues.
The teams are battling for the K1 million first prize and the K700,000 second prize. In addition, a best player award of K30,000 will be given to the best player in each place, while the player of the tournament will receive K50,000. Tin Maung (Mandalay)