Chairman of the National Disaster Management Committee and Vice President U Henry Van Thio presided over a ceremony yesterday morning to provide relief assistance for the flood victims in Mon State.
Organized by the Myanmar Rice Federation, the ceremony was held at the Mon State Hall to donate a total of 2,250 rice bags, 20 million kyat and 370 bags of chemical fertilizers contributed by Myanmar Rice Millers’ Association, Myanmar Rice Merchants Association and its branches from states/regions and wholesale commodity centers and individual rice merchants to the National Disaster Management Committee in the presence of Mon State’s Chief Minister Dr Aye Zan, Deputy Ministers Rear Admiral Myint Nwe, U Tin Myint, U Hla Kyaw, U Soe Aung, departmental officials, Chairman of the Myanmar Rice Federation U Ye Min Aung and representatives from partner associations.
In his speech, Vice President U Henry Van Thio said that local organizations and businesspersons joined hands with the government whenever natural disasters took place in Myanmar. 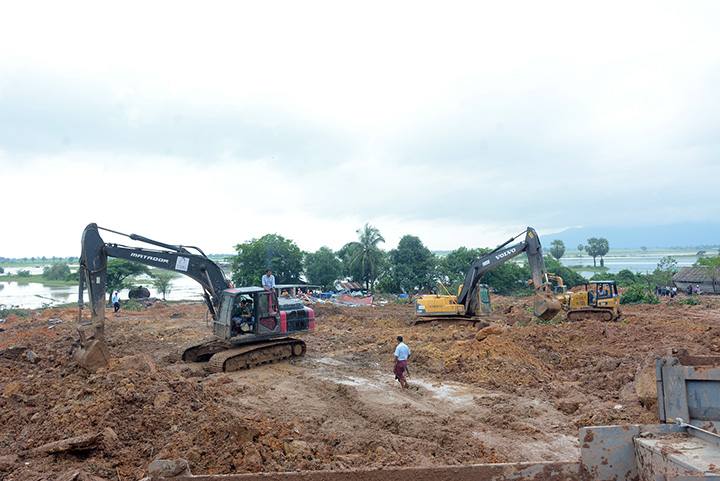 He also appreciated the donation made by the Myanmar Rice Federation and its partner associations for the flood victims in Mon State, and encouraged them to provide more support in relief and rehabilitation works of the government.
The Chairman and responsible persons of Myanmar Rice Federation presented 2,250 rice bags to the Vice President for the victims of natural disasters in Mon State.
The Chief Minister of Mon State Government and Deputy Minster U Soe Aung accepted the cash donation of K20 million and 370 bags of chemical fertilizers.
U Soe Aung then gave the honorary certificates of the National Disaster Management Committee to the Chairman of Myanmar Rice Federation and the responsible persons after which words of thanks were given by the Chief Minister.
Then, the Vice President, together with the Chief Minister, the Deputy Ministers, the departmental officials, visited the temporary rescue camp in Kyaikmaraw Township, and comforted the flood victims, providing relief assistance of cash, rice, packs of dried noodles and canned fish.
They later proceed to the rescue camps in the schools of Kyaikmaraw Township, and gave cash and relief materials to the flood victims who were forced to leave 7,706 houses in 26 villages due to flash floods after torrential rains in and round their area.
The Vice President and party also went to inspect the search and rescue works at Thae Byu Gon village in Paung Township. U Myat Thu, Director General of Fire Services Department, and U Kyaw Myint Hlaing, Director General of Irrigation and Water Utilization Management Department, presented the works of their departments at the disaster-affected areas.
In response to the explanation, the Vice President gave instructions to give priority to safety in conducting the ongoing search and rescue works and the forthcoming works.

At the site where the landslide occurred search and rescue works were conducted with a combined force totalling more than 500 personnel consisting of Tatmadaw, Police, Fire Department, Red Cross, civil society organizations and locals assisted by machines.
Next, the Vice President and party inspected a planned site at Bayintnaung Town new ward in Bilin Township to settle households affected yearly by flooding and inundation in Bilin Town where Thaton District General Administration Department District Administrator explained about the status of establishing new wards. The Vice President gave advice and comments to ensure coordination where required.
In the late afternoon the Vice President attended an emergency meeting of the Bago Region disaster management team held at the Bago Region government office Royal Hantha meeting hall. At the meeting the Vice President said Myanmar was facing the effect of climate change like other countries of the world. According to weather experts monsoon will enter Myanmar late and will exit early. Although there would not be any changes in rainfall, the duration will be short and there would be more incidents of flash flooding and inundation and thus more care must be given toward strengthening dams and dikes. Water entry into the dams and reservoirs would be of shorter duration and thus more care must be taken toward effectively collecting water without waste. Not only irrigation personnel but the end user farmers must also be educated. Trees and forests that protect from the effect of climate change must be maintained and planting of trees must be conducted.
Prevention works must be conducted in places where natural disaster could occur and preventive exercises must be conducted. As Bago Region was the major producer of rice, if there were flooding and inundation, backup replacement support and assistance for replanting must be ready. Having correct and timely information was important in conducting search, rescue and rehabilitation works. Emphasis must be placed down to the grass roots for this. The Vice President advised the audience to hope for the best and to be prepared for the worst.
Afterwards Bago Region Chief Minister U Win Thein, Deputy Ministers, Region ministers and departmental officials attending the meeting explained about natural disaster protection works conducted. The meeting came to a close after concluding remarks by the Vice President. — MNA
(Translated by Zaw Min)