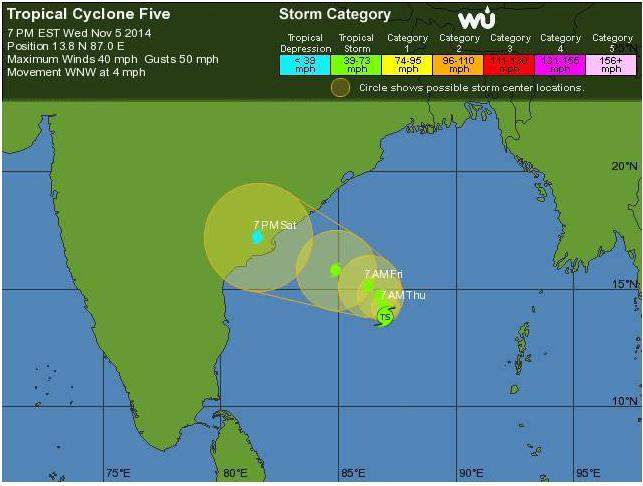 Yangon, 6  Nov — A tropical cyclone over the central Bay of Bengal is moving in a northwest direction and is likely to cross the southeast coast of India on Saturday evening, U Tun Lwin, the former director-general of the Myanmar Meteorology and Hydrology Department, said.
In a Facebook post, the private weather forecaster said the storm is likely to hit Andra Pradesh State in southeast India on Saturday evening.
According to the observations at 14.30 hrs MST on Thursday by the Myanmar Meteorology and Hydrology Department, the depression is centered at about 480 miles southwest of Pathein in Myanmar, 360 miles northwest of Port Blair in India and 310 miles southeast of Vishakhapatnan in India.
It is forecast to further intensify into a cyclonic storm within 24 hours and move in north-northwest direction, the DMH said.
The present stage of depression is coded yellow as it is not moving towards Myanmar’s coasts, according to the DMH.
Under the influence of the depression, rain or thunderstorms are likely to be fairly widespread in the Lower Sagaing, Mandalay and Magway, Bago, Yangon, Ayeyawady and Taninthayi regions and Shan, Rakhine, Kayah, Kayin and Mon states with isolated regional heavy rainfall.
Squalls and rough seas are likely at times off and along the Myanmar coasts and surface windspeeds in squalls may reach 40mph.
October and November are the peak months for cyclones over the Bay of Bengal and Arabian Sea, and, on average, five cyclones develop each year.
This year has seen three so far, Nanauk  in June, Hudhud and Nilofar in October.