Economy and Investment
In the third month, the State Administration Council stepped up efforts to facilitate the smooth operations of businesses and industries after the long disruption due to COVID-19. On 1 April 2021, efforts were made to speed up the operations of factories in the Myotha Industrial Zone in the Mandalay Region. The Ministry of Investment and Foreign Trade is working on procedural reforms to make it easier to set up new projects and expand businesses.
A ten-day Gems, Jade and Pearls Emporium conducted in kyats was successfully held at Mani Yadanar Jade Hall in Nay Pyi Taw from 1 to 10 April. On the first day of the sales, the State Administration Council Chairman viewed the Emporium, which was held following COVID-19 health rules and social distancing methods. Despite the situation, the Emporium achieved its objectives of boosting the local gem, jade, and pearls trade. A total of 317 pearl lots were sold for K1,427.26 million, 1,955 jade lots for K31,595.79 million and 52 lots of gems for K525.8 million.
The Ministry of Investment and Foreign Economic Relations is leading efforts to promote and improve services for existing investors, examine the barriers for investors, resolve these in line with the law, and facilitate and enhance the role of the One Stop Service (OSS) Office in the Yangon Region Office to ensure its smooth operation. Since Yangon Region is the most heavily invested region, the Yangon Region Investment Committee will be closely monitoring investment activities in accordance with the law, review the case delays in issuing permits, and facilitate submissions to the Myanmar Investment Commission. The OSS members of Yangon Region daily solve difficulties related to trade, investment, money transfer and salary payment.

Three hundred billion kyats have been earmarked for purchasing medicines for public hospitals, and health workers who were in the CDM were repeatedly invited to return to work. On the other hand, government doctors that force CDM on others and incite staff to shut down public hospitals (expelling patients in the process) have been prosecuted and blacklisted.

Trade flows are stepping up despite the impact of COVID-19 and attempts to undermine the State economy. The Working Committee on Facilitation of Trade and Goods Ensuring the swift Flow of Trade and Goods addresses problems such as trade flow barriers. The records of the Committee show that between 22 February and 8 April 2021, a total of 78,603 containers — 38,254 containers of imported goods and 40,349 containers of exported products —were processed successfully. Some 239,043 tonnes of octane, 304,022 tonnes of diesel and 115,993 tonnes of palm oil were unloaded at the jetties. For border trade sectors, the Muse trade zone earned more than $298 million between 22 February and 8 April 2021, while the Myawady trade zone achieved more than $249 million.
The Myanmar Central Bank Chairman and officials from the Myanmar Banks Association met on 9 April. They sought solutions to ensure the smooth functioning of banks and overcome current challenges, such as reduced public confidence in the banking sector and difficulties related to cash liquidity for the public and for businesses. New measures are being put in place to resolve these challenges, including mobile and internet banking services. Food and agriculture
During an inspection tour of the Thilawa Multi-Purpose Farming Zone on 30 April, the State Administration Council Chairman highlighted the importance of food quality and safety, as well as the necessity to develop high-quality varieties of paddy through research.
The Ministry of Agriculture, Livestock and Irrigation is leading a project for development of the farming sector with the use of modern techniques. The use of such techniques also requires technical assistance for the farmers. There are also plans to extend livestock breeding diploma courses. The Ministry is encouraging the import and distribution of agricultural inputs with high quality and low cost before the planting season in 2021. Myanmar has many potentials and opportunities to import and distribute seeds, pesticides, and fertilizer. The registration and certificates for export-import of agricultural inputs can now be easily applied online through the Myanmar Agricultural Inputs Registration System (MAIRS).
The Ministry is also taking measures to ensure that agricultural land is not misused and that agricultural lands are not affected by economic zones and housing. Businesses that support the agricultural sector in screening land use rights will be prioritized. Other concerns being addressed by the Ministry include food and nutrition security, employment opportunities in agriculture, and livestock breeding, and relief plans for businesses badly hit by COVID-19.
Health and sports
On 9 April 2021, the COVID-19-related stay-at-home restrictions were lifted from some townships of Yangon, Mandalay and Bago regions. The COVID-19 Vaccination Fund Management Sub-Committee released public statements on 12, 23, and 29 April, with full transparency on the status of funding and donations. The temporary suspension of international commercial flights to Myanmar has been extended to 31 May, given continuing concerns about the COVID-19 pandemic. The government has implemented awareness-raising programmes on the COVID-19 third wave and on the need to maintain disease prevention measures, given the high rate of infection in neighbouring countries.
The Ministry of Health has been administering COVID-19 vaccination programmes since 27 January 2021. As of 21 April, a total of 1.54 million people had been administered the first dose of the vaccine, and some 340,000 had been administered the second dose. In addition, the Ministry has been providing COVID-19 vaccination to the staff and their families of foreign embassies in Yangon since 5 April.
On 4 April 2021, the Eastern Regional Military Command Tatmadaw Hospital provided COVID-19 testing and quarantine services for the migrant workers who were repatriated to Kayin and Mon states through the border areas. On 5 April 2021, medical corps from the Triangle Regional Military Command provided medical and refresher courses to the members of the United Wa State Army and their families in Wanhone hospital in Monghsat Township, Eastern Shan State. Forty-six ethnic people benefited from the Medical Course, and 24 benefited from the Medical Refresher Course.
The Ministry of Health and Sports is planning to resume operations in public hospitals in the townships of Yangon, Mandalay, and Nay Pyi Taw. Some hospitals in townships have re-opened but still do not have adequate staff due to civil disobedience by public doctors and nurses. Three hundred billion kyats have been earmarked for purchasing medicines for public hospitals, and health workers who were in the CDM were repeatedly invited to return to work. On the other hand, government doctors that force CDM on others and incite staff to shut down public hospitals (expelling patients in the process) have been prosecuted and blacklisted. Private hospitals and clinics that have allowed such doctors to practice on their premises, despite several warnings from the government, have been banned.
Sports competitions are being planned at the region- and state level. A coordination meeting on sports competition and construction was held on 26 April 2021. Football matches for men under 21 and women under 25 years of age will be held first. Region- and state-level competitions in wushu and futsal are planned for August and September 2021. Reopening of schools and universities
Since the closure of schools and universities leads to learning losses and affects not only the students, but also their parents and ultimately the State, the government’s policy was to reopen schools and universities as soon as feasible.
The coordination meeting on expanding business degree and law degree courses in universities was held on 26 April. The Chairman of the State Administration Council Senior General Min Aung Hlaing addressed the meeting. He mentioned the need to produce more graduates in law and emphasized the necessity for young people to gain the right education, real knowledge and relevant skills. Ten out of Myanmar’s 24 development zones (each zone containing at least one arts and science university, one technical university, and one computer science university) offer law courses, while efforts are being made to offer these courses to another ten zones.
Announcements were made in April to facilitate the reopening of the country’s educational facilities. All teachers, academic and management staff under the Ministry of Education were informed to return to work by 3 May. Applications for postgraduate studies and diploma courses for medical science and doctoral programmes of medical and related universities under the Ministry of Health and Sports would be kept open until 15 May. The application deadline for doctoral and postgraduate applications at universities under the Ministry of Education was initially set for 6 April 2021, but the deadline was re-set to 12 April before the Thingyan festival. Universities, degree colleges, and colleges under the Department of Higher Education will start reopening by offering final year courses and master’s degree courses from 5 May for the 2019-2020 academic year.

Transport and communications
The Inland Water Transport under the Ministry of Transport and Communications is re-launching inland shipping services. Myanma Railways has launched the Yangon-Nay Pyi Taw-Yangon passenger trains and the Yangon-Mandalay, Yangon-Mawlamyine and Yangon-Pyay train services. On 7 April, a new Airbus A320-214 XY-ALR arrived in Myanmar, purchased by the commercial airlines Myanmar Airways International. Under instructions by the Yangon Region Administration Council, highway buses were resumed, and 627 buses operating along 37 Yangon City Bus (YBS) lines provided services during the Thingyan festival period.
Plans are underway to develop the travel and tour sector in Kengtung and Tachilek districts in Shan State. Efforts will be made to create itineraries that offer pilgrimages to places of worship and traditional cultures. There are plans to develop domestic tourism in cultural and scenic places in eastern Shan State, with care taken to protect and promote cultural heritage sites and national parks such as the Loi Mwe National Park.
Literature, news, and information

As with preceding months, April—the third month in office of the new Government—was filled with activities to advance towards these national goals. The way forward is still challenging, but with discipline, goodwill and competence, much progress can be made.

On 1 April 2021, the Ministry of Information awarded the Sarpay Beikman awards for 2019, with a total of 29 awards for 13 genres of literature. The Ministry of Information has been engaged in the development of Myanmar literature since 1969. It has been inviting writers who face constraints in having their works published and awarding deserving writers for their works. On 2 April, the Pakokku Literary Prize, Scholarship Prize and Pakokku U Ohn Pe Library Book Award for 2019 were awarded. Daw Kywe Kywe won the 2019 Pakokku U Ohn Pe Lifetime Achievement Award for Literature.
The State Administration Council’s Information Team held its 4/2021 press conference on 9 April. The Team explained the ongoing work of the State Administration Council in the economic, health, national security and education spheres and the processes to provide citizenship scrutiny cards to every citizen including ethnic nationalities. The Team also presented activities to enhance the long-term development, peace and stability of regions and states, including operations to ensure security and the rule of law, and combat illegal activities such as drug trafficking.
The State Administration Council’s Information Team held weekly media briefings through videoconferences, which were attended by local and international news agencies. With full transparency, the concerned officials clarified issues such as the ASEAN Leaders Meeting, the prosecution of civil servants for their incitement of others to join the civil disobedience movement, the breach of the Nationwide Ceasefire Agreement by the Kachin Independence Army who attacked Tatmadaw military bases, the attacks by insurgents against the regional command in Magway and Meiktila Townships, and the incitement of some media outlets using disinformation about the events of 24 April in Mindat Township. From May 2021 towards national goals
The common goals of all the ethnic nationalities living in the country are peace and stability, and socio-economic development of the country. At present, the State Administration Council is paving the way to democracy and socio-economic progress. The Council’s Five-Point Road Map and the Nine Objectives on political, economic, and social affairs provide the guiding framework to achieve these goals. As with preceding months, April—the third month in office of the new Government—was filled with activities to advance towards these national goals. The way forward is still challenging, but with discipline, goodwill and competence, much progress can be made. 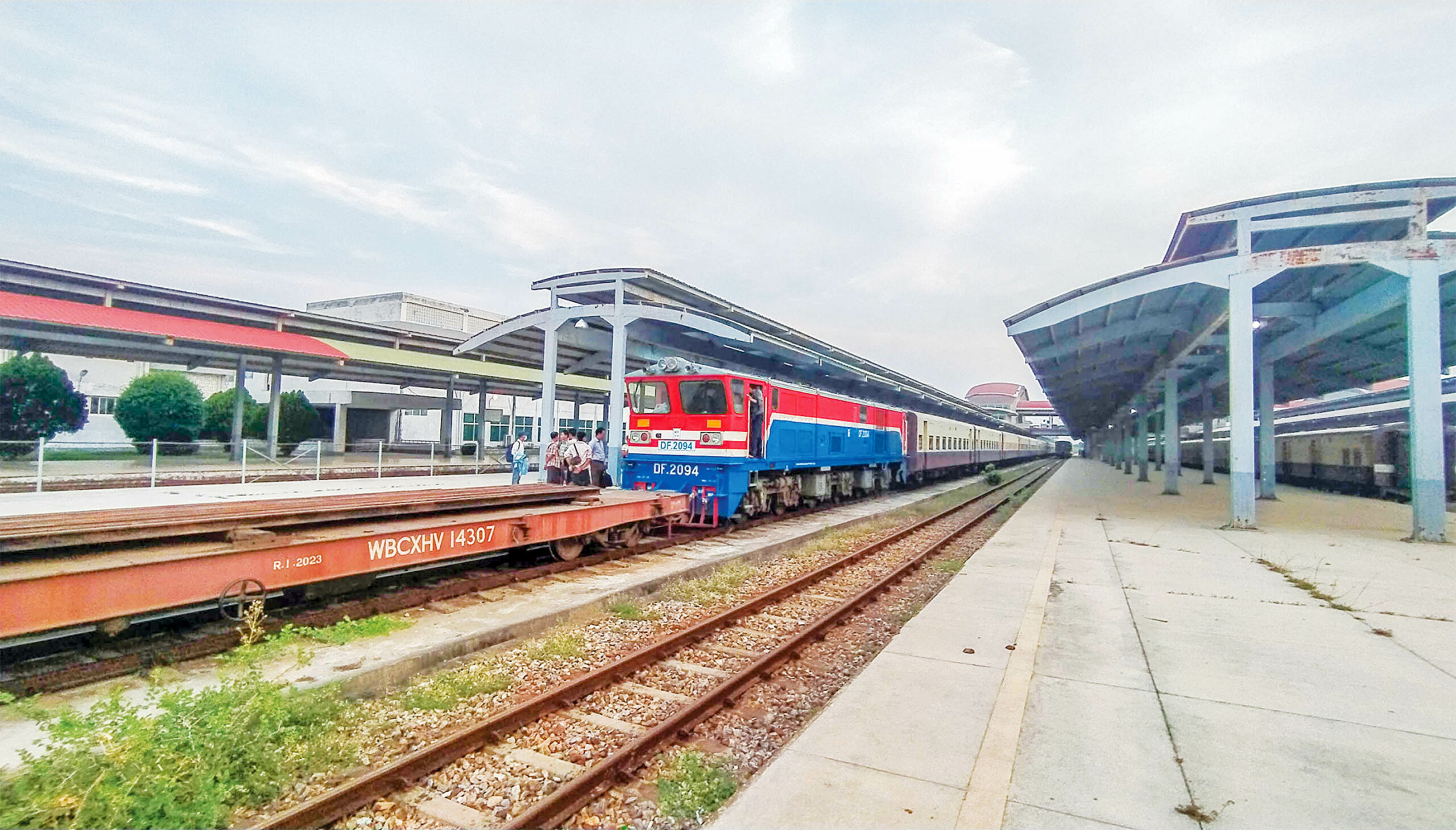