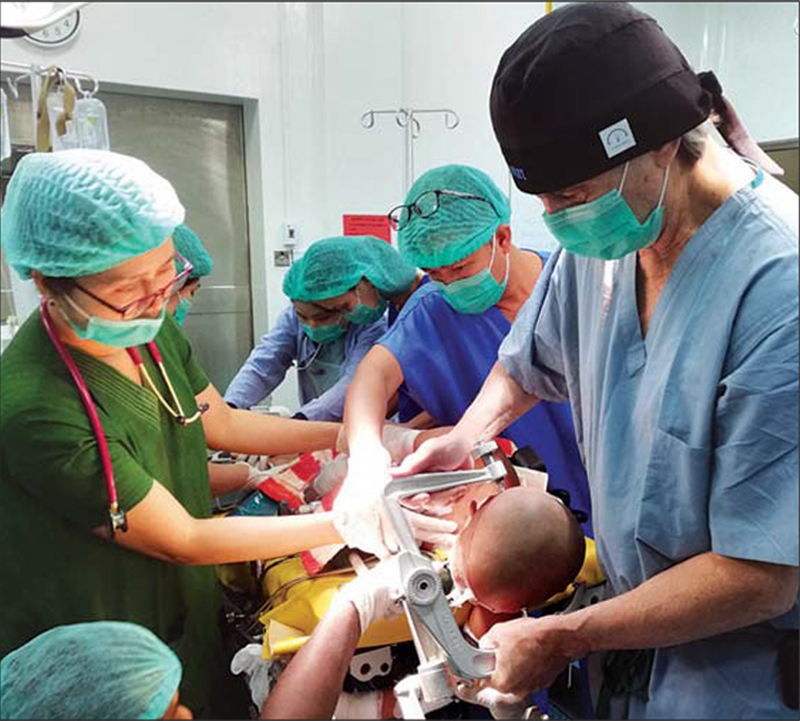 surgeons from the University of Medicine 2, Yangon, and the Henry Ford Hospital from Detroit, USA, led by Prof Jack Rock has been providing medical treatment every November under the programme of the Foundation for International Education in Neurological Surgery (FIENS).
FIENS was founded by a group of leading neurosurgeons in order to address the critical lack of trained neurosurgeons in developing countries. Since 1969, they have provided hands-on training and education to neurosurgeons around the world.
Prof Rock and his team of medical professionals impart their skills and knowledge by working side-by-side with neurosurgeons nurses here including surgery methods, ICU response, pre and post-surgery care, and proper maintenance of surgical equipment.
The following are excerpts from interviews with officials, medical practitioners and other people involved in this charitable programme.

Dr Myint Htwe
Union Minister for Health and Sports
“One of our ministry’s many priorities is continually developing the capabilities of all medical practitioners in the nation, so that they may provide the best medical services they can offer to the public.”
“In order to do this, we organize training courses and send them abroad for international training, seminars and workshops. This way, they won’t be left behind on the technological advances of the world. Since I first assumed the union minister position in April 2016, there have been about 7,000 training courses organized or co-facilitated by the health ministry.”
“We’ve had about 300 trainees on courses longer than six months and 1,400 trainees on those with a duration less than six months. Then we have about 60 people studying for their PhD and a hundred studying MSc. These are high qualifications. Those who return to Myanmar after finishing these studies are able to provide the best medical treatment and services to our people.”
“We have medical practitioners from developed countries come here to train our nation’s doctors in the fields of cardiology, kidneys, liver, and the digestive tract. But of course, this time we have Prof Jack Rock and his medical team at the North Okkalapa General Hospital.”
“Prof Rock’s team consists of nurses to medical engineers who will teach our doctors on the use and maintenance of medical equipment and the latest surgical methods used by the world. They’ve also brought along their own advanced medical equipment which they use to treat the people here. Prof Jack Rock also consults with our doctors here through Skype every fortnight. We record his consultations and share it to all the neurosurgeons across Myanmar.”
“Prof Jack Rock also teaches a class of 16 holders of master degrees in neuroscience every year. He praises them for their perseverance and adaptability. It is a source of pride for us.”
“Currently, we have neurological departments in Yangon General Hospital, North Okkalapa General Hospital, Mandalay General Hospital, and Nay Pyi Taw 1000-bed Hospital. We plan to open more neurological departments in Magway General Hospital an Taunggyi Sao San Tun Hospital sometime in the future.”

Prof Dr Win Myaing
Head of Neurological Department, North Okkalapa General Hospital
“Our neurological department was opened on 2 May, 2017. We branched off from Yangon General Hospital to accommodate the growing needs in North Okkalapa General Hospital and its community.”
“We first connected with Prof Jack Rock and the Henry Ford Hospital of Detroit through the Foundation for International Education in Neurological Surgery (FIENS) in 2012. They were eager to come and advance the neurological field in Myanmar. We welcomed them with open arms and they’ve been visiting Myanmar every year in November since 2012. It’s seven years since.”
“Before their arrival in November, we tell them if we have patients that would be difficult to enter surgery in Myanmar, patients with conditions they might be interested in, or if we need certain medical equipment. Then we make early appointments with the patients, with the earliest booking done about 3-4 months in advance.”
“In some of our regions, we don’t even have CT scanners to diagnose people who have headaches or migraines or to look for internal bleeding. Prof Jack Rock and his team will be bringing an infrascan machine. It’s a bit more advanced and is a recent invention. It costs around US$15,000 in America, but they will be bringing it for use in Myanmar.”
“The good news is they will be donating that machine after teaching us how to operate it. The infrascan allows us to check if there is internal bleeding in the head in the event a surgeon isn’t around. It’s a very useful machine and it’s so small and portable. You could carry it in your pocket. They usually bring inventions like that with them.”
“They also take two of our doctors for a two-month training course back to the US once a year. They usually stay for two weeks when they come in November. This time they arrived on 2 November. Neurosurgery takes about 5 to 6 hours per person, so they most they can operate in a day is three people. And they manage to operate on about 20 people during each of their visits here.”
“Right now, they’ve performed surgery on four people. They’ve also invited three professors from South Korea to teach our younger practitioners at a US-Myanmar-South Korea neurosurgery meeting.”
“I arrived at the neurological department in 1990. From that time till 2010, you could count how many neurosurgeons existed in Myanmar with both hands. But the use of motorbikes have increased the number of accidents. People especially get wounded near the head and with neurosurgeons in the rural areas, they were attended to the best of their ability by general practitioners.”
“When Prof Rock arrived here, he wanted to improve this grim situation and we began discussing it in 2012. During our time, if someone wants to join the neurological department, they had to attend a general surgery course for three years. And after that, we’d only get about one patient every one or two years.”
“They suggested opening a neurosurgery course so people can directly learn about neurosurgery and which will in turn increase the number of practitioners. We took them to the Ministry of Health and Sports, and after much discussion, the ministry opened a three-year course.”
“We opened the courses in three schools, mainly University of Medicine 1 and 2 in Yangon and the one in Mandalay. We now have about 60 students actively attending these courses. After receiving training for three years, the doctor will be able to treat neurological emergencies with greater efficiency. After one more year, we will appoint them to rural hospitals where they can greatly aid the local population.”
“With the help of this neurological programme, patients need to spend only K1 million or less for treatment, instead of going to Thailand or Singapore as in the past which cost more than K35 million.”
“When we were younger, it took about two hours just to remove the cranium, but now it only takes about 15 minutes. In addition, the old preconception of people receiving brain surgery will absolutely die is no more. We rarely hear of patients dying from a tumour removal. Overall, there has been numerous positive improvements.”

Prof Dr Kyi Hlaing
Neurological Department, North Okkalapa General Hospital
“Ten years ago, there weren’t even ten neurosurgeons in all of Myanmar at a time. There were only two neurological departments in Yangon and one in Mandalay. We were also severely cut off from the rest of the world and our technology and methods became outdated.”
“We decided that something needed to be done. So, we went abroad seeking assistance. Mind you, government-to-government cooperation existed but I believe neuroscience would be the last in the health category.”
“We first approached Dr U Win Myaing for this matter. A German medical practitioner came to us first in 2012 and stayed for a month. Then Dr Jack Rock came and everything slowly improved.”
“The most important thing when performing cranial surgery is the position. This involves everything from how the head is placed to the steps the operation will take. It all needed to be preplanned and done successfully otherwise every step faces failure. Working with Dr Rock and his team greatly improved our understanding and skills for that.”
“ICU support is also crucial. No matter how good we operate the surgery, inadequate ICU support will yield negative results. That is why the nurses in ICU support are given proper training as well.”
“The field of neurology has greatly advanced after the 20th Century. The CT Scan and MRI were invented. It used to be extremely difficult to operate on the brain and there was an even lesser chance for survival of the patient. But now, the mortality rate is less than 10%.”
“The youth generation are always the future of the nation. We are delighted so many young people are joining this field and helping it grow.”
To be continued
(Translated by Pen Dali)