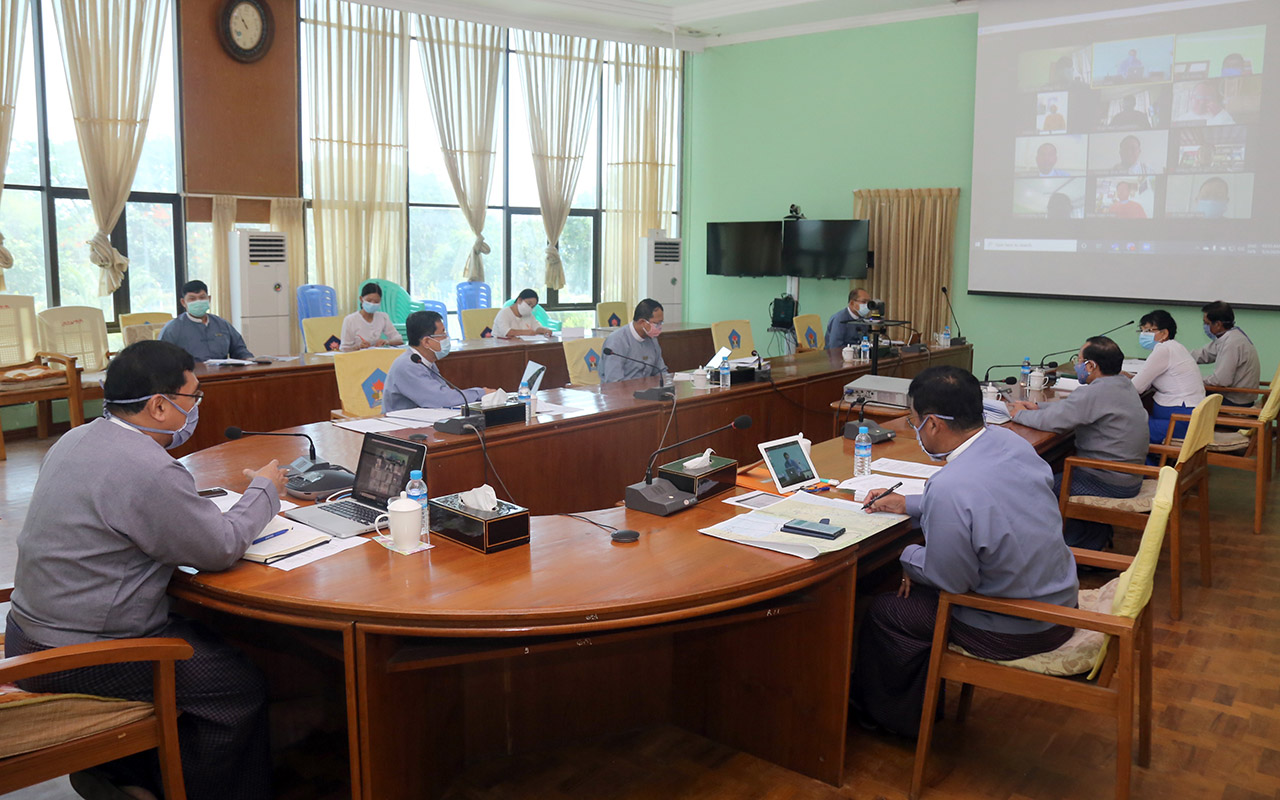 Union Minister for Social Welfare, Relief and Resettlement Dr Win Myat Aye discussed the latest situations of internally displaced persons in Paletwa Township, Chin State, cooperation between the ministry and Chin State government and continued assistance.
Those presented the meeting were Deputy Minister U Soe Aung, directors-general, Chin State government officials, Hluttaw representatives, members of the Khumi Affairs Coordination Council (KACC) assisting IDPs in Paletwa, and members of the Chin IDP Assistance and Rehabilitation Committee.
The Union Minister said the conflicts in Paletwa have forced the IDPs to flee not only to Paletwa, but also to Yangon City and Rakhine State as well. He said there are current short and long term processes for the IDPs and COVID-19 needs to be incorporated as an important topic.
Dr Win Myat Aye said they are implementing action plans for the five states that have IDP camps and national-level meetings are discussing additional food deliveries to IDPs in Paletwa. He said they regularly share COVID-19 news and information in the IDP camps and supply them woven face masks, soap, body thermometers, and wash basins as necessary.
The Union Minister said the 10 guidelines sent by the Ministry of Health and Sports through SMS are the main guidance for the public to follow and requested officials to assist IDP camp residents in following them.
The Union Minister said they are increasing hand-speaker and loudspeaker announcements, the social welfare department is providing regular support for the elderly and pregnant mothers fleeing from conflict and an additional support process will be done once, support for people living with disabilities will be done accordingly, cooperating to overcome challenges regarding working in Paletwa and making providing support more efficient.
Next, meeting attendees discussed current processes for IDPs in Paletwa, challenges of providing food to IDPs in Paletwa, Sami and neighbouring villages, supporting destroyed buildings in 9 villages, acquiring ambulances and an administrative vehicle for people injured in conflicts, increasing health protection in Paletwa and Sami and constructing low-cost housing in the two towns for people from faraway regions that are facing difficulties in implementing rehabilitation, preparing to mitigate challenges in providing food to Paletwa residents during the rainy season, making the Matupi-Sami-Paletwa road accessible in the rainy season, and acquiring necessary items to protect against COVID-19.
The local government officials then discussed fulfilling the requirements as quickly as possible and the MoSWRR coordinated cooperation. — MNA (Translated by Zaw Htet Oo)