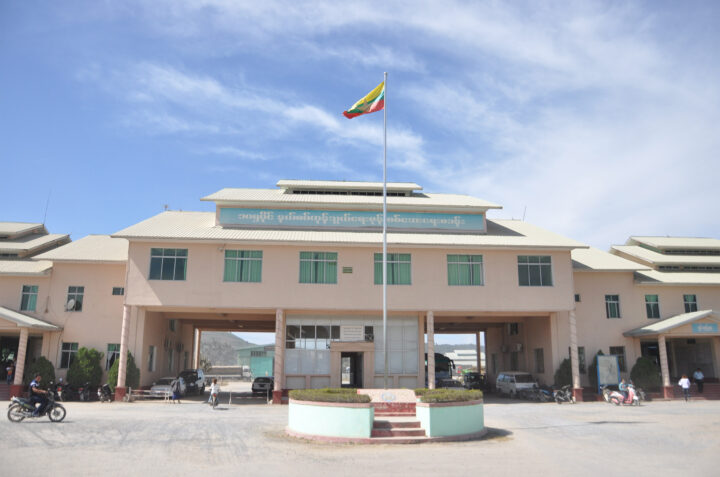 Myanmar’s rice export to China through the Muse border checkpoint has plummeted recently, said Vice-Chair U Min Thein of the Muse Rice Wholesale Centre.
The drop was due to the closure of the Man Wein checkpoint, which is the major place of trading of rice and broken rice between Myanmar and China following the outbreak of COVID-19 positive cases. With the Man Wein checkpoint closing, export items, including rice and broken rice, are being traded through China via the Kyin San Kyawt checkpoint.
Earlier, Myanmar exported about 30,000 bags of rice and broken rice to China daily. But now, only about 10,000 bags have been shipped, he added.
“Previously, about 70 truckloads of rice and broken rice were traded daily through Man Wein checkpoint. Now, only 24 truckloads are traded. The export has dropped one third. Though three truckloads used to go earlier, only one truckload would go now. Earlier, about 30,000 bags of rice and broken rice were traded through the Man Wein checkpoint. In contrast, now only 10,000 bags are being traded through Kyin San Kyawt checkpoint,” U Min Thein explained.
Currently, the price of Muse market is 117 Yuans for a bag of broken rice, 128 Yuans for Nga Sein, 129 Yuans for Thuka and 137 Yuans for Shin Tone, according to the Muse Rice Wholesale Centre.
The Man Wein checkpoint has been closed for over one month because of the outbreak of COVID-19. According to Muse 105th Trade Zone of the Trade Department under the Ministry of Commerce, China has no plan to reopen it yet.
With the declining number of COVID-19 positive patients in the Kyalgaung area, the lockdown restrictions imposed on the Kyalgaung area were lifted starting from 4 May. But, the observation is still going on for another three more months. As a result, the Man Wein checkpoint has not been planned to reopen, according to the announcement of the Muse 105th Mile Trade Zone, the Trade Department on 5 May.
In addition, in coordination with the Shweli Foreign Relations Department, the Man Wein crossing has not been reopened yet. It will reopen only after having the detailed plan, according to the statement.
The relevant traders will also be informed if there is an official notification from China to reopen the border.
Moreover, according to the Muse Rice Wholesale Centre, China’s Customs authorities granted rice export licenses to 47 Myanmar companies on 26 February 2021.
This year, the Chinese government has allowed more rice export licenses to more companies. So, the volume of rice export will increase this year compared to that of the previous year.
During the first three months of the current financial year, Myanmar exported over 720,000 tonnes of rice and broken rice worth over US$ 275 million, according to Myanmar Rice Federation.
However, Myanmar has expected to export only 2 million tonnes of rice in this FY because the weather changes have affected irrigation water. Consequently, summer paddy cultivation will have to be reduced, said U Ye Min Aung, the Chairman of the Myanmar Rice Federation.
Myanmar generated over $ 800 million from rice export in the previous FY — 2019-2020 ending 30 September with an estimated volume of over 2.5 million tonnes. — NN/GNLM