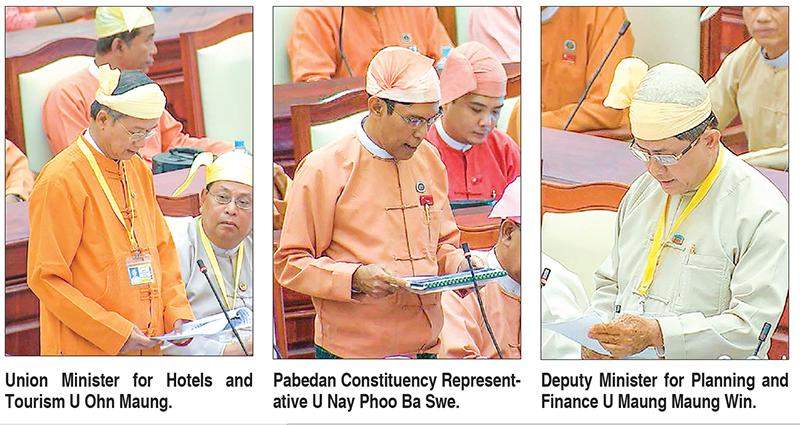 THE Pyithu Hluttaw heard answers to parliamentary questions by the ministries concerned during its 28th day session yesterday.
During a Q & A session, Union Minister for Hotels and Tourism U Ohn Maung replied to a call for the ensuring of transparency regarding the Nyaung Shwe Haw Nann repair works, pledging that local people will be informed of the repair works when a repair plan emerges and funds for repairing the building are received.
It is too early to speak about the repairs as no decisions have been made yet on the matter, added the Union minister.
According to the Union minister, donor organisations or individuals who can bear the cost of repair and maintenance of the building are still being sought.
If would be better if the government could allocate funds for the repair works, said the Union minister.
Next, Deputy Minister for Planning and Finance U Maung Maung Win responded to a question regarding measures to be taken by the government to lift Myanmar from the Least Developed Country list, where it has been since 1987. The deputy minister said that the country will seek technological and developmental assistance from the Istanbul Programme of Action for the Least Developed Countries while striving to remove itself.
According to the deputy minister, Myanmar was listed in 1987 but did not enjoy LDC benefits due to economic sanctions.
Works are underway to seek short term technical advice and consultancies from resident UNDP experts regarding adoption of policies to support Myanmar’s graduation from the LDC status, said the deputy minister.
He stressed the need to be granted favourable EBA and Generalised Special Preferences (GSP) while striving for graduation from the LDC status, saying that the country is looking to enhance cooperation with multinational organisations as well as foreign countries including LDCs.
Next, the deputy minister replied to a question regarding the income taxation system, saying that the Internal Revenue Department states the amount of ‘white’ money collected from taxpayers in their tax books each tax year.
Then, U Nay Phoo Ba Swe of Pabedan Constituency submitted a proposal calling for the implementation of an e-government system to the Pyithu Hluttaw.