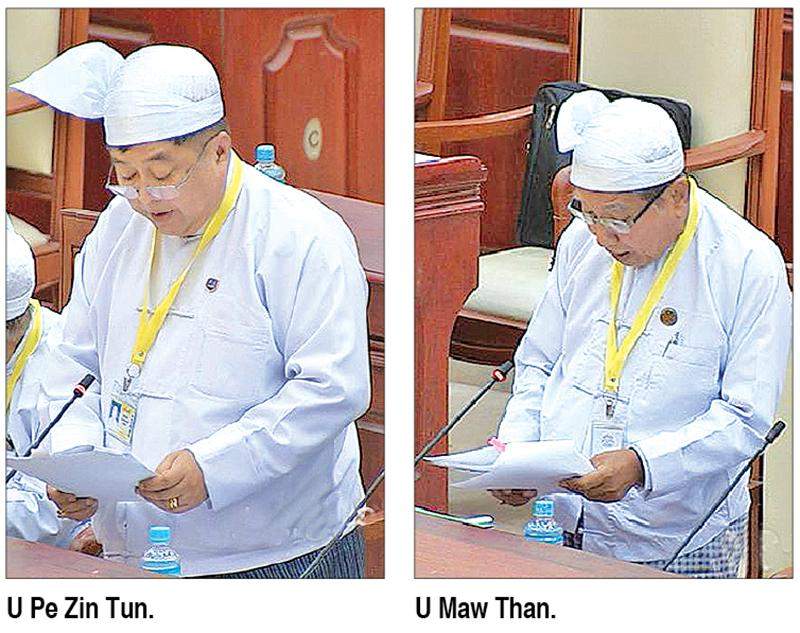 THE Pyithu Hluttaw session continued for its 25th day with officials concerned answering parliamentary questions and lawmakers approving a Bill to amend the Law on Commission for Interpretation of Statutes yesterday.
During a Q & A session, Union Auditor-General U Maw Than stated that there is no plan to promote township audit officers to assistant directors as the government is striving for ensuring efficient performance on a tight budget.
Next, Union Minister for Electricity and Energy U Pe Zin Tun said that Thahtay hydropower project will be completed by the end of the 2023-2024 FY if the funds are fully allocated.
Electricity generated from the project will be used for development undertakings in Rakhine State, added the Union minister.
He also replied that arrangements have been made to ensure 390 megawatts to avoid summer power outages next year, adding that works are underway to fix tangled power nests, replace old wires and overloaded transformers with new ones and set up new posts.
Likewise, the Union minister said that a small hydropower project that can generate 600 megawatts is being implemented on Namtmalon creek in Homalin Township.
It is impossible to implement another small hydropower project on Namtpann Ngar creek next fiscal year as suggested by a lawmaker as there is no enough funds to carry out the two projects at the same time, he added.
During yesterday’s session the Pyithu Hluttaw approved the Bill amending the Law on Commission for Interpretation of Statutes with no amendment.