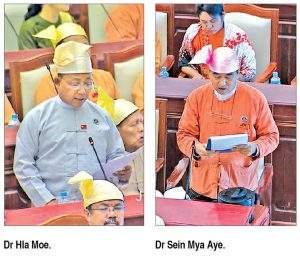 THE second Pyithu Hluttaw’s first regular session entered its tenth day, with parliamentarians holding discussions on the El Niño urgent motion submitted by Dr Maung Thin of Meiktila Constituency.
A total of 14 MPs discussed the urgent motion calling on the Union government to adopt risk mitigation measures against ill-effects of El Niño which is expected to hit Myanmar this year.
In his discussion, Dr Hla Moe of Aungmyay Thasan Constituency stressed the need of launching emergency response and preparedness drills in order to mitigate possible losses in the event of disasters. The MP pointed out that such drills are not conducted yet in the country despite plans had been drawn up by the ministries concerned.   He also called for necessary policies to be formulated to purchase rice for State reserves.
U Naing Htoo Aung of Ngahtoogyi Constituency also called on officials concerned to gear up for coming El Niño’s impacts, warning that the situation is likely to get worse during this summer as some parts of the country have started suffering droughts and fire outbreaks are reported frequently.
In his discussion, Dr Sein Mya Aye of Dala Constituencyemphasised the importance of taking necessary measures to guarantee the socioeconomic status of the people including farmers as agricultural outputs and fishery exports will likely be limited by consequences of El Niño.
Defense Services Personnel Pyithu Hluttaw representative Lt-Col Aung Kyaw Moe highlighted the leadership role of the Union government in the fight against El Niño effects in cooperation with regional governments, non-governmental organizations and the people. During the tenth day session, Pyithu Hluttaw Speaker U Win Myint read out messages sent by Mr. Sergei E Nayshkin, Chairman of the State Duma of the Russian Federation, and Mr. Nguyen Sinh Hung, Chairman of the National Assembly of Viet Nam. Two other messages were documented.  Pyithu Hluttaw session continues today.