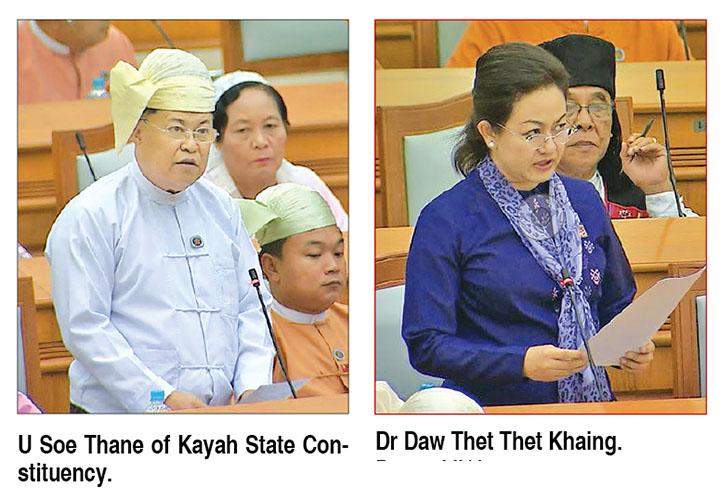 THE Pyidaungsu Hluttaw approved the President’s message on the release of the Medium-term Debt Management Strategy following a parliamentary discussion and the deputy minister’s response to discussions of the parliamentarians yesterday.
It is required that the Central Bank of Myanmar slow down foreign loans and to sell government treasury bonds and certificates on the domestic market in order to adjust for inflation, said U Soe Thane of Kayah State Constituency at the Pyidaungsu Hluttaw session yesterday.
Based on a medium-term debt management strategy the MP pointed out that the CBM’s borrowing accounted for 42 percent of the country’s external debt that totals US$9.16nbillion and 78 percent of domestic debt which is K13, 684billion.
The CBM’s borrowing not only increases the money supply but also causes inflation,
added the MP.
He called on the government to prepare foreign earnings measures for debt settlements, expressing hope that the government would release its medium-term debt management strategy report annually and calling for effective implementation of loan-assisted projects to be beneficial to the country and its people.
Dr Daw Thet Thet Khaing of Dagon Constituency stressed the need for GDP growth along with an increase in local and foreign debts.
The MP suggested that the debt settlement plan should be redrawn by negotiating with creditors to manage refunding risks and highlighted the importance of measures to be taken for development of the domestic market.
Regarding discussions of the MPs, Deputy Minister for Planning and Finance U Maung Maung Win replied that arrangements are being made to reduce the borrowing by the CBM and ensure there is no further borrowing.
The government is striving for development of the country’s capital market through various ways and means, added the deputy minister.
The deputy minister told the Pyidaungsu Hluttaw that rules and regulations of the auction were being drafted by the ministry in cooperation with the Asian Development Bank, the World Bank and experts.
During yesterday’s Pyidaungsu Hluttaw session four parliamentarians debated the 2016-2017 Union Budget (Amendment) and the Bill amending the 2016 Union Budget Law.
Next, Union Minister for Education Dr Myo Thein Gyi elaborated on the country’s efforts to become a member of the Convention on the Physical Protection of Nuclear Materials and Nuclear Facilities.