Visible progress
During the two year operational period, the YBS has witnessed visible progress as well as many challenges. The number of buses in service stands out at (4000), and the half of which are under the company ownership that deployed new vehicles brining customer satisfaction of the passengers. It is reported that the new system is far better than the old system, citing in a survey of JICA as well as social media reports.
All the YBS buses do not employ the cash collecting conductor on the car, but put up a cash box to drop in the bus fare from the passengers. The passengers have to step onto the bus from the front entrance and stepped out of the car from rear exit.
As there are no more Dyna, BM and old dilapidated vehicles, the roads and streets of Yangon have been turned into a dignified status with new buses. There are no more untoward arguments and fighting incidents with small weapons among the competing and rival drivers, conductors for the reckless driving and forcefully pulling up of passengers. Therefore, in the new system, the passengers could travel to their desired destination with comfort and human dignity.
All the YBS buses on the move are attached with GPS system and the Yangon Bus Operator (YBO) is monitoring the movement and offering management. Each and every movement of the bus could be watched and directed as necessary, and even caution could be given to the drivers who drives beyond (50) kilometers limit. The proper functioning of the buses could now be managed and controlled through modern technology.
Moreover, the comprehensive insurance guarantee for all accidents have been covered on YBS buses, bringing compensation to injured passengers as well as other car accidents on the roads. With this backdrop, all the drivers of YBS are required to have professional red driving license to get the job. The new recruits of drivers are being trained and nurtured in providing better services to the passengers and trainings are organized by the Road Transport Department and YRTA. The special driving short course has been conducted up to (12) times and that over (1000) new drivers have been imparted with driving skills.
In the company owned new buses, seats are reserved for members of Sangha, senior citizens, and disabled persons, and also equipped with other public address system. Soon, there would be (500) ultra-modern bus shelter using modern technology for the convenience of the public.
To be on a par with other countries in bus transport, card payment system would be introduced within six months in making the passenger payment system more transparent. It could avoid and solve the current problems such as that of scarcity of small currency notes for bus fare, that of to shun away the use of torn and smeared notes, and that of other misdemeanor. Such card system would be introduced in all public transport sectors. Moreover, the YRTA is arranging for more bus parking terminals.
The most important point is that the passengers are now enjoying the comfort of the ride on YBS buses, which could never be termed and equated on cash value. All the weal and woe of riding buses in the past were gone, and now the passengers are in human dignity and comfort on the YBS buses. This could elevated the moral and mental strength of the people and builds trust among the people towards the YBS.

YBS is to serve public
The responsible persons are trying their best to serve the public through the YBS system as well as to charge the most reasonable bus fare to the passengers, and therefore, it could be termed as YBS is out there to serve the public.
Some comments and criticisms happened to be the talk of the town and spread in the social media that the shareholders and the companies are experiencing loss. The YBS is the public service industry that is unlike merchandise business, and therefore, profit and heavy earning could never be reaped in a short term. Since the business involved machinery and engines, wear and tear are normally occurred that needs to repair and fix to enable the bus functioning. Of course, it incurred expenses, and therefore, appropriate and expected profit is currently not on the agenda.
If the old and outdated buses are used, then the profit comes easily as the investment was rather less. If and when we used the cheaper buses, then it would never provide comfort to the passengers. During the Ma Hta Tha era, old buses are being used that reaped heavy and profuse profits by the individual owners, and drivers and bus conductors; leaving the passengers in tight and difficult situation to suffer all the tale of woe with great unhappiness.
The YBS system has change into providing better service to the passengers as well as charging minimum fare of MMK 200, which is the kind and sincere offer to the Yangon public. As we all are aware that these days, the charge of man paddling trishaw stands out at MMK 500 for a short journey and a cup of roadside tea will cost the consumer MMK 500. Therefore, the bus fare of YBS is rather cheap. With the alarming hikes of the fuel cost, the operational price tag of the private cars and the taxi are running high. Therefore, most people rely on YBS buses. We all need to cooperate for the development of YBS system. 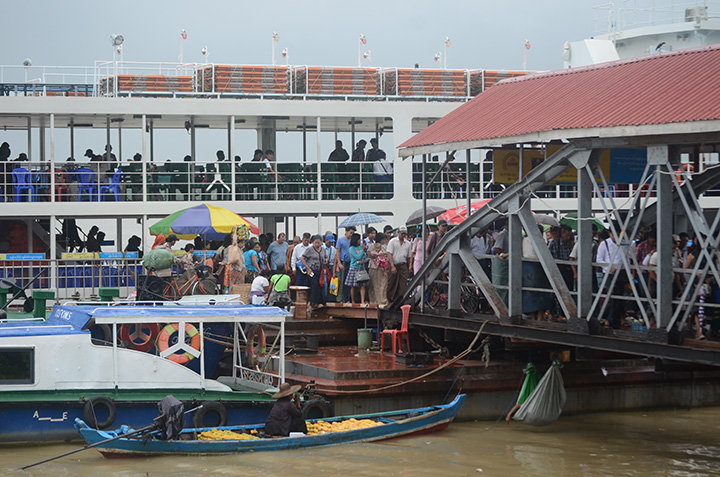 Challenges
The transform from Ma Hta Tha system to new YBS system is complete and total change, and therefore, it is not an easy task. There are visible developments as well as challenges. At this juncture, the most important point is to change the individual ownership into company ownership. Among the (4000) buses in deployment, the two third of the buses are under the company ownership, and the remaining buses are owned by individuals. The remaining busses under referral are the stumbling blocks that hinder the good discipline and better services. There are complaint letters coming in by telling the ill intent of some individuals that would like to cling to old system and delay the new YBS system.
In the new YBS system, it assigns only one driver, and that the driver made stops only at designated bus stands. There, the problems cropped up when some nasty and lousy passengers asked the driver to stop the bus at irregular junction as they have desired, and that erupted with strong and fierce arguments. Some rude passengers bullied over the lone driver. There are also some unpleasant incidents such as that of free ride; that of putting torn bank notes; that of eating snacks on the bus; that of littering dirt. The bad and awful moral characters of some owners, the drivers and the passengers are still difficult to be improved and rectified.
Some points are on the agenda to improve such as that of integrating circular trains, water buses, transfer centers, large parking lots; fuel stations near the parking lots, and etc.
Work together for the development of YBS
The comprehensive changes of the YBS system are not an easy task. When studying the changes of other countries, they endured many bitter difficulties before achieving success in their endeavors. The functioning of the YBS is taking up momentum and its success is in the horizon. At this juncture, we must be careful of ill intent people to destroy the success of YBS. Along with the accomplishment of YBS, the improvement could be seen such as that of lesser use of private cars in the city; that of easing the traffic jam on the roads; that of the convenient of the passengers on the buses; that of generating more working hours; that of providing helping hands towards nations’ Gross Domestic Product (Per Capita Income); that of good and commodity flows in the city; that of stabilizing the price hikes; that of elevating the nations’ economy in one way or another.
In the final analysis, the writer of this article would like to draw the conclusion that exclusive transformation of YBS system would be successful in the shortest possible time with the encouragement of the government, the constructive participation of Yangon public, the continuous financial aids and subsidy, the formation of transport think tank, the involvement of political parties, other organizations, the social media, and the stakeholders are the most vital components to work together in cooperation for the success of the transport scheme.
Translated by UMT (Ahlon)