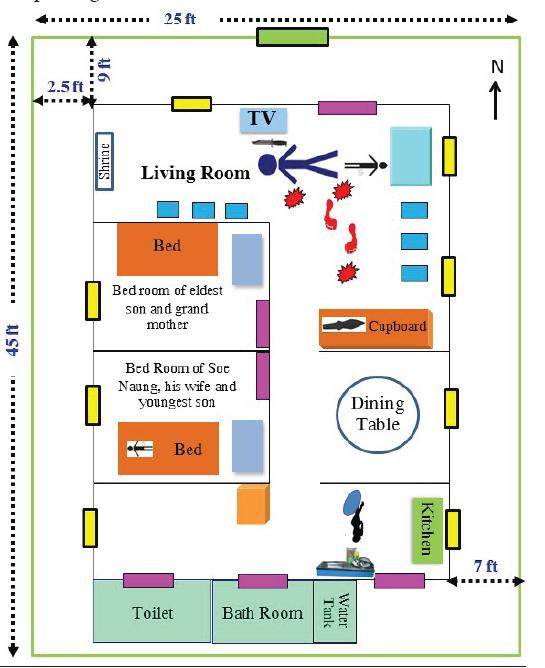 Q : What did you discover when you arrived at the scene of the crime?
A: We found the bodies of Ko Soe Naung and his eldest son in the shrine, the body of his wife in the kitchen and the body of the youngest child (in bed) in the bedroom.
Upon closer inspection of the crime scene we found blood pools under the dining-table and in front of a cupboard. The suspect(s) had attempted to hastily soak up some of the pooled blood using clothing stripped from Ko Soe Naung and his eldest son (a shirt and a pair of trousers respectively).
The shirt of Ko Soe Naung was found on his bed and Han Thura’s trousers were found under the dining table.
Q: What was the state of the victims’ bodies when you inspected them?
A: Ko Soe Naung was found lying on the floor with multiple stab wounds across his chest. Han Thura was found with five stab wounds and Ma Cherry Pwint was found with 12 stab wounds. Maung Swan Htet Myat, the youngest son, had been stabbed four times.
Q: Do the police have an idea of the sort of weapon that may have been used?
A: According to the forensic surgeon on the case the wounds were made by a pointed, single sided blade. An 11-inch knife was found near the body of Ko Soe Naung and is suspected of being the murder weapon.
Q: Were you able to determine where the knife came from?
A: We are almost certain that the knife belonged to the family. We discovered the companion sheath for the knife in the living room. Min Sithu, a police member of Hlegu Myoma police station and Ma Cherry Pwint’s younger brother confirmed this.
A: Could you elaborate on the state of the crime scene (the family home)?
Q: The home is located 65 feet from the next home to the east and 150 feet from the next home to the west. For this reason, we have not found witnesses who actually heard the disturbance.
Q: How about the ongoing investigation?
A: Investigating officers have so far interviewed 62 people in connection with the case, which is ongoing. We are looking for three suspects.
Q: Do you have a photo or description of the three suspects?
A: Photographs were found in the mobile phone of Ma Cherry Pwint that we believe show the suspects. We have circulated these photographs to region/state police forces to help locate them for questioning. The Yangon Region Police Force is cooperating with the Criminal Investigation Department to solve the case.
For more information on the case or to provide information to police, dial the Yangon Region Police Force, ph: 01 2323199, 01 2301646 or 01 2300747.