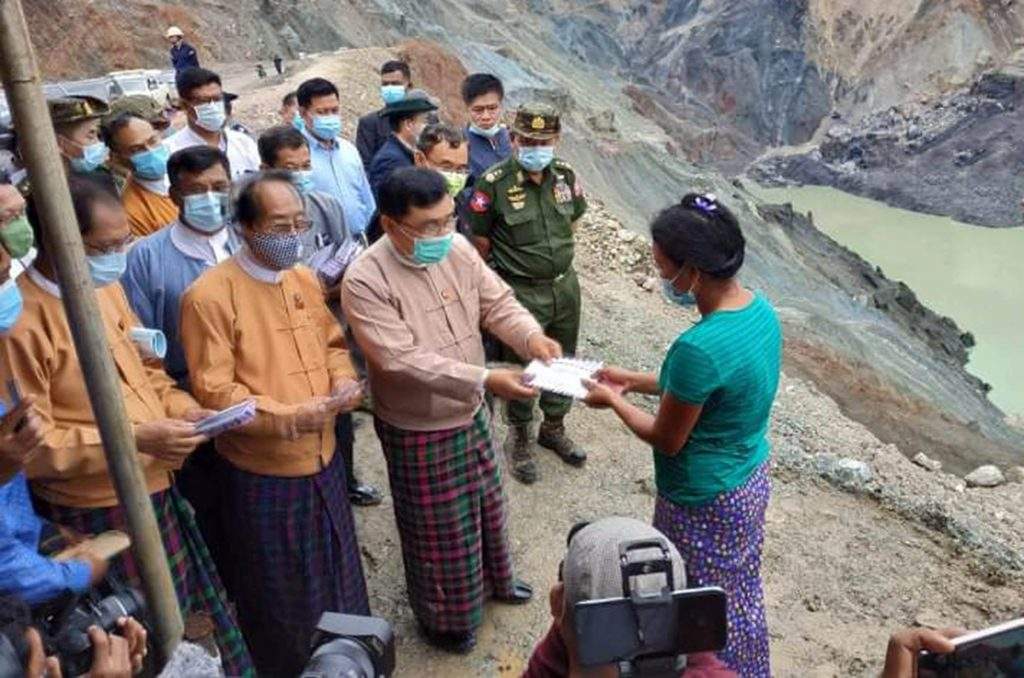 The investigation body into the landslide that occurred at a mining site in Phakant, Kachin State, on 2 July went to investigate at the site of the incident yesterday morning.

The landslide killed 172 workers and injured 54 others at a mining site near Wheykha Village, Seikmu Village-tract in Lone Khin, Phakant Township. The investigation body was formed with Union Minister U Ohn Win as Chairman and Union Ministers Lt-Gen Soe Htut and Dr Win Myat Aye as members along with Kachin State Chief Minister Dr Khat Aung.

The investigation body was briefed on the cause of the landslide and the current situation by U Tint San Aung, General Manager for Myanma Gems Enterprise in Phakant. The Union Ministers then met with 16 families of the deceased and offered their condolences. They also handed over financial support from the National Disaster Management Committee, Ministry of Social Welfare, Relief and Resettlement, Kachin State Government, Myanmar Gems and Jewellery Entrepreneurs Association, and Myanmar Thura Gems Co. Ltd.

The investigation body then visited 12 people who were injured in the landslide at Wheykha Station Hospital and handed over financial support from the National Disaster Management Committee, Ministry of Social Welfare, Relief and Resettlement, and Kachin State government. Furthermore, Myanmar Gems and Jewellery Entrepreneurs Association and Myanmar Thura Gems Co. Ltd. also provided financial support to the injured workers. From there, the investigation body visited sites in Sapaw Hmaw, Maw Wam Gyi, Maw Wam Lay and Hmaw Sarsi Hmaw. They observed the potential for disaster at the locations and the workers working in precarious conditions and discussed preparations to mitigate disaster.

The National Disaster Management Committee and Ministry of Social Welfare, Relief and Resettlement are providing K96.8 million to the victims of the landslide at a rate of K500,000 for each family of the 172 deceased and K200,000 for 54 who were injured.

Next, the National Disaster Management Committee provided K11 million as financial support to the Red Cross, members of the Auxiliary Fire Brigade and local humanitarian aid organizations that helped in the search and rescue procedure during the landslide.

Afterwards, the investigation body held a meeting with relevant departments and organizations concerning their next course of action at a meeting room in Sky Hotel. —MNA  (Translated by Zaw Htet Oo)