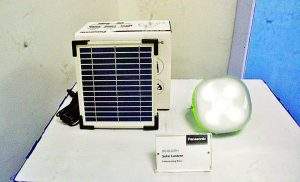 PANASONIC, one of Japan’s leading consumer electronics companies, on Saturday donated 2,400 portable solar lanterns to people across Myanmar through civil society organisations.
Under its 100 Thousand Solar Lanterns Project, this is the fourth time the Japanese electronics giant has donated the solar lanterns since 2012, contributing nearly 10,000 lanterns to areas without electricity in Myanmar via local CSOs.
The aim of the donation was to offer rural populations easy access to electricity and alleviate their dependence on kerosene lamps, which emit black smoke and pose a fire hazard. Dr Kyaw Htut, deputy general secretary of Myanmar Red Cross Society, said: “We plan to donate to flood victims in Kyaunggon, Ayeyawady Region, and Seytoktara and Pwintbyu in Magway Region. Needy families that have elderly members and school children top on the list of the MRCS’s priorities.” According to the International Energy Agency, 68 per cent of the country’s total population has no access to electricity, while 1.32 billion people are living in areas without electricity worldwide.