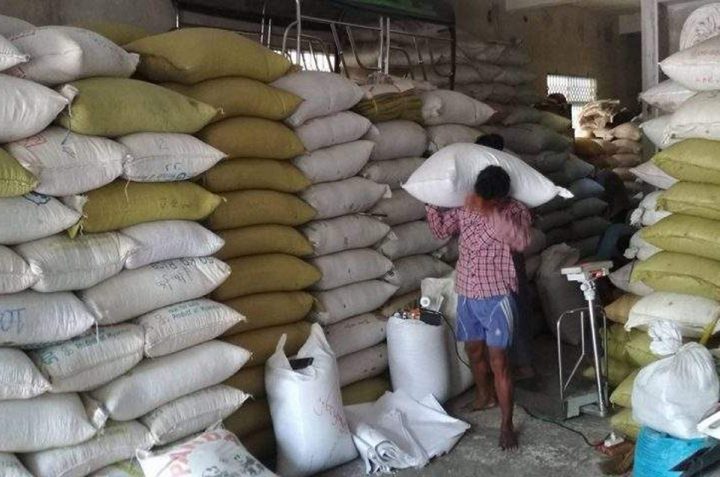 A worker piling the bag of beans in a warehouse in Mandalay. Photo: Min Htet Aung

Prices of black bean have increased by over K120,000 per tonne over three weeks, according to the bean market. The black bean fetched K950,000 per tonnes in the bean market on 1 September. However, the price of black bean rose to K107,000 per tonne on 23 September. The pigeon pea price hit K814,000 per tonne on 1 September, and it jumped to K830,000 per tonne on 23 September.
The price of bean has risen because of demand not only from India but also from Pakistan, Bangladesh, Nepal and UAE, said an official from Myanmar Pulses, Beans and Sesame Seeds Merchants Association (MPBSSMA). “The price of bean has increased in the local market because of rising demand from India. With the yield of bean rising in Myanmar, the demand from India, Pakistan, Bangladesh, Nepal and UAE is also on the rise. India is purchasing Myanmar bean directly these days. Then, they will import the bean later when the gates are reopened. With a slight increase in FOB price, the price of bean has also increased,” he added. Although India is the primary buyer of Myanmar’s black beans and pigeon peas, it has been delaying the buying of the beans amid the COVID-19 crisis, said the traders. India government rapidly changed the import period of 400,000 tonnes of black bean to three months by the end of August 2020 from the earlier set deadline of March 2021. Its official notice was announced on 22 May.
Although Myanmar bean traders have asked for deadline extension for import quota of 400,000 tonnes, India stall has not responded to the request.
Myanmar has delivered nearly 100,000 tonnes of black bean out of 400,000 tonnes quota. Around 200,000 tonnes of black beans are also stockpiled in the local market, according to MPBSSMA. Myanmar is the prominent grower of black bean, which is highly demanded from India. Besides Myanmar, Australia and Africa grow other kinds of peas such as pigeon peas, green grams and yellow peas, according to the MPBSSMA. (Translated by Hay Mar)