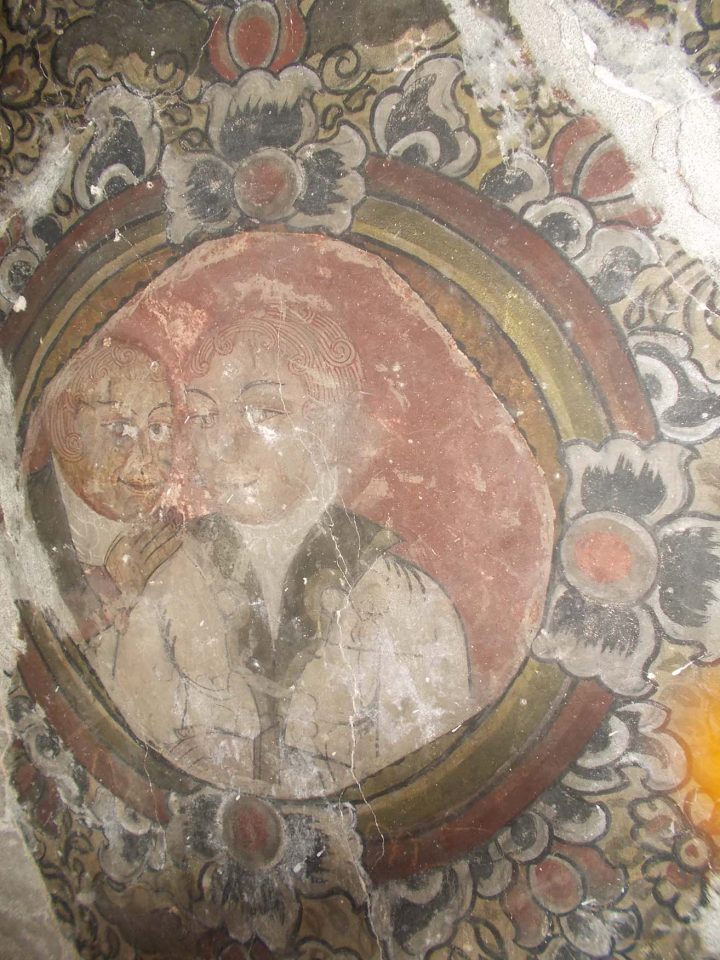 People who study ancient mural paintings in Inwa usually focus on a mural painting which depicts a foreigner picture near the Lawka Htake Oo Pagoda in Old Inwa. There are five ancient monuments that possess mural paintings in Old Inwa, including this stupa with a foreigner picture in the mural. They are the front of the Mahar Mingalar Mann Aung stupa’s eastern wall, ancient building numbers 193,233,243 in the southern side of the town and ancient building number 445 within the wall of Lawka Tharaphu.
The paintings are of Buddhist depictions and golden florals. Among the paintings is a rare mural depicting a foreign couple at the ancient monument number 193 near the Lawka Htake Oo Pagoda which is different from other pagodas’ mural paintings.
The murals tell the story of the times and reflect the culture of that time. By studying ancient murals, one can also predict the cultural, artistic, social and economic activities of the time.Paintings have been painted on cave walls since many years ago. It has evolved from painting in ochre yellow and red to modern oil painting.
In studying the ancient historical monuments, we can find out the year of the pagoda built by studying the mural paintings on it. Most of the Ancient Myanmar traditional artists painted the outlines of a line drawing. On the other hand, scholars have concluded that Myanmar art began to be drawn in the late Bagan period around 1300 AD, focusing on the line drawing method.
Murals are of great historical value. According to archaeologists, the methods of painting murals are very interesting. First of all, the wall was painted with tamarind leaves to remove the vapour of the lime. One or two months after the vapour of lime was gone, ochre white, ochre yellow and the red were applied to the walls as a base coat.
Then, natural paints were used to paint the masterpieces. The black colour was obtained from charcoal, kerosene, and oil.The white colour was from talc and copper sulphate crystal The green colour was obtained by mixing indigo and yellow orpiment.The red colour was obtained from red ochre and Mercuric Sulfide and mixed with neem resin and fish gall. At present, we can study the murals which are supposed to be the pictures of foreigners at an ancient pagoda near the LawkaHtakeOo Stupa in Old Inwa.—NweNadi, MyitNgae (Translated by Ei Phyu Phyu Aung)