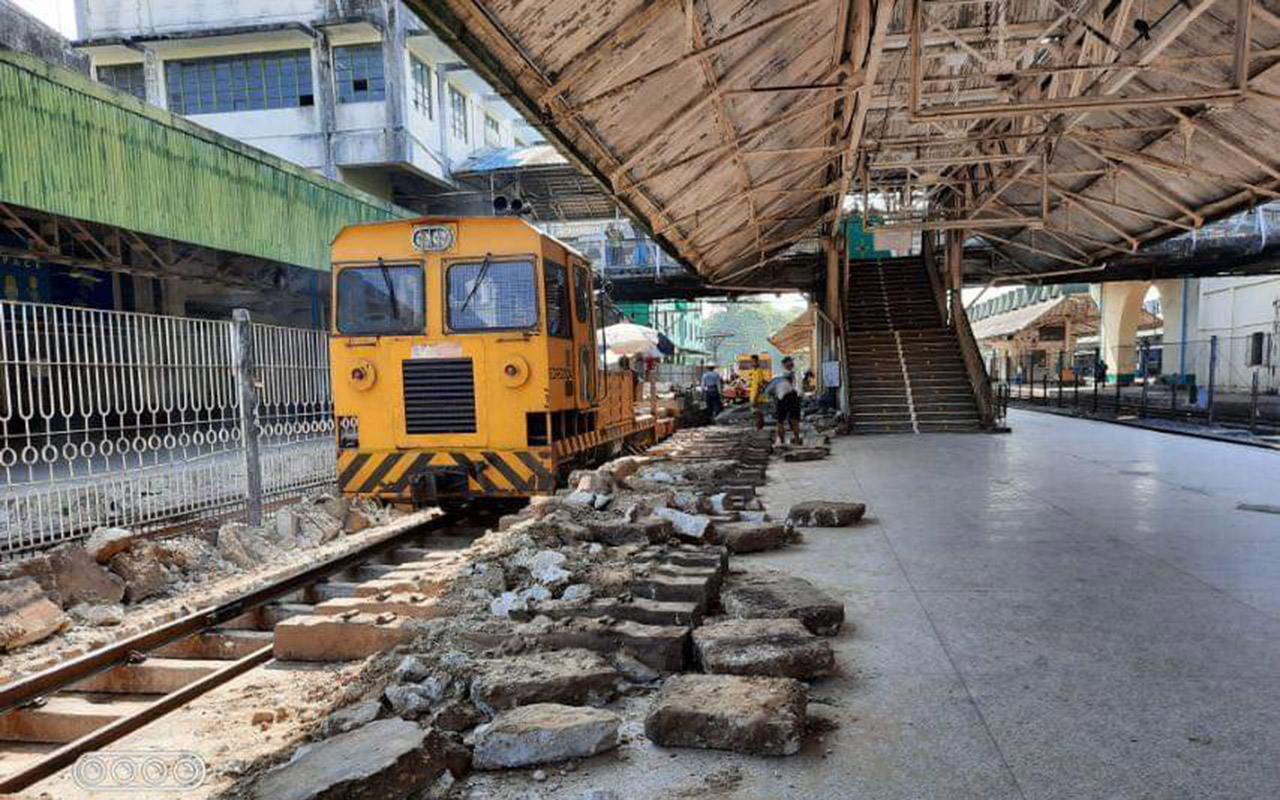 With the concrete railway sleepers laid at Yangon Central Railway Station damaged, the railway sleepers laid in Platforms 2, 3 and 4 are being repaired for the safety of the commuters with the guideline of Yangon Division 7 chief engineer (civil) of Myanma Railway (MR), said an official from MR.
U Kyaw Lwin, the assistant engineer (civil) from MR said, “The railway sleepers are damaged by the rain and the litters dropped by the passengers onto the railway from the coaches. We have difficulty repairing the sleepers as they are damaged. Therefore, we could not repair the existing rail lines. So, we need to replace the existing sleepers with the new ones. Our chief engineer used nine steel rails for the circular railway. So, we will replace the old rails with the new ones.”
Among other platforms, platform 2 is important. With a decline in the number of passengers because of coronavirus spread, we are upgrading the railway this time. The railway is 1,744 feet long. Platform 1 is currently being used by the passengers, he added.
The railway of Platforms 3 and 4 have already been replaced. The replacement of the rails and the sleepers in platform 2 will be made within a month.
U Kyaw Htet Zaw, the junior engineer (1) from MR said, “We are hearing noise because of the damaged railway. Therefore, we are upgrading the railway. The railway has been constructed for many years and so many rails are damaged already. The 29-foot railway is controlled by 17 sleepers. Most of the 17 sleepers are badly damaged now. So, we need to replace them with the new ones. We need to replace 269 sleepers in Platform 2.” Initially, MR conducted upgrading of the Yangon circular railway for the commuters. Additionally, MR is upgrading the Yangon-Mandalay railway. So, MR has urged the passengers to follow the rules and regulations when they are onboard the trains.
MR is upgrading the circular railway, railway stations, locomotives and coaches and railway over passes/bridges for the passengers to be able to travel conveniently. —Myint Maung Soe (Translated by Hay Mar)