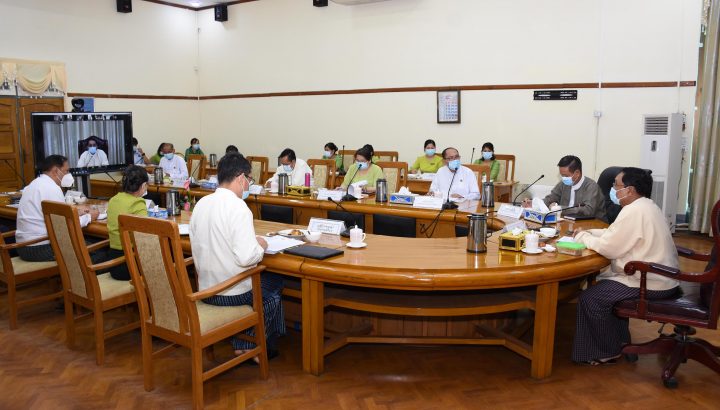 The Ministry of Commerce organized a virtual meeting with Myanmar commercial attachés in China’s Beijing, Nanning and Hong Kong, the United States, Japan and the Republic of Korea on finding ways for trade promotion with those countries yesterday.
At the meeting, Union Minister for Commerce Dr Than Myint asked the Myanmar commercial attachés to discuss promotion of bilateral ties, trade and investment, taking priority on connecting busines persons with relevant departmental organizations, and presenting reports on economic recovery works of the respective nations.
Deputy Minister also said the commercial attachés that their main duty is to promote trades and investments, urging them to try hard to meet the high hopes of the country given upon them and to grasp the opportunity of some countries’ interests in making investments in Myanmar.
The commercial attachés reported on the situation of trades and investments, between Myanmar and the respective countries.
The Union Minister and the Deputy Minister said the attachés to study e-commerce situation for development of e-commerce in Myanmar, to create links for purchasing machineries in Myanmar’s MSME sector, to collect and report on the sorts of the businesses in Japan and ROK for sending Myanmar workers, to work for promotion of Myanmar tourism industry, and to exchange information between the commercial attachés.
The ministry will continue meeting with the commercial attachés from Switzerland, Belgium, Thailand, Singapore and India today, 23 October.—MNA  (Translated by Kyaw Zin Tun)