The Ministry of Industry was reorganized on 1 April 2015 by adopting with 4 state policies on industrial sector development; with 2 missions; with 6 work programs in the functioning of the Ministry; two departments, and four industrial establishments.

Development of Industrial Sector
The Ministry undertakes a wide ranging responsibilities in the operation such as that of drafting industrial policies in line with the State economy; that of drafting industrial strategic development and industrial zone; the policy on economic development of SMEs; that of all the implementation in accordance with law and by laws; that of the policy in saving power and energy along with guidelines (or) drafting framework of law; that of providing training courses in producing industrial workers as human resources development.
Other tasks are also undertaken such as that of enforcing in line with the hazardous chemical related laws; that of drafting laws with regards to motor vehicle production development in line with the motor vehicle policy; that of working in connection with the Myanmar Sustainable Development Plan and Myanmar Investment Promotion Plan.
During the third year of incumbent government, the Ministry of Industry is working in line with the State economic policy with emphasis on research and innovation for quality production; it also included that of expansion of production as required in the market; that of sales promotion; that of the transformation into (PPP); that of the development in SMEs; that of the systematic training of skillful workers; that of opening mobile vocational training schools in states and regions; that of the formation of the mechanical inspection teams for the agricultural machinery and vehicles for the safety and satisfaction of the people; that of environmental conservation and the production of renewable energy.

Research and innovation
The Ministry of Industry is also working major tasks such as that of quality control and distribution of essential drugs in the country; that of the good storage practice (GSP); that of functioning Automated Warehouse Good Manufacturing Process (GMP).

Expansion of production
Pharmaceutical Industry (Insein) is producing snake bite anti-venom that could be stored in villages with no electricity for 5 years duration through freeze dried form with the technology from Australia. It has resulted with the saving of lives in the rural areas.
The Ministry of Industry is now producing over 10 per cent of the country’s need in drugs with the value of MMK 49 billion. In the past, it produced only 5 per cent.
The need of “saline” in the country is 75 million each year and that the Ministry could produce only 5 million in the past and now it could produce 15 million.
Moreover, the Ministry of Industry is producing the hospital use medical furniture; the steel utensils for operation theaters; and the medical grade hospital use ambulance vehicles. 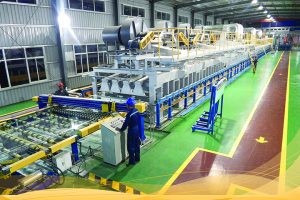 Motor Vehicle Section
The Ministry has formed “Commission on Accreditation of Ambulance, Myanmar – CAAM” for quality control on ambulance cars. One unit of ambulance simulator has been assembled and transferred to the Ministry of Health and Sports on 12 December 2018.
The Ministry has opened 4 mobile marts of industrial produce and roaming in Yangon, Mandalay, Nay Pyi Taw and other major cities.
Two units of mobile vocational vehicle are moving across the country and that three more units of mobile vocational vehicle are on the agenda to roll out for more vocational trainings.
The Modulo Brand Electric Buses are to be produced in collaboration with Hungary’s CSEPLE Holding Ltd. with European Technology in cooperation with Green Power Myanmar at No 14 Heavy Factory at Thargaya.

Fabric Section
National Export Strategy-NES has already been drawn and under implementation and that a supply chain is necessary, and therefore further long term plan is to be stretched out with the assistance and help of the Deutsche Gesellschaft für Internationale Zusammenarbeit (GIZ).
The production agenda included such as that of the gypsum and the POP bandage in the future.

Renewable Energy
For the renewable energy project, the MoU was signed with EAM of Norway for ground mounted solar farm (28.6 MW) in the industrial zone of (Thaton), and that a pilot project (6 KW) has been started with the Ministry of Electricity and Energy.
The Ministry has engaged in the tasks such as that of the drafting of Energy Efficiency and Conservation Law (Draft) to be completed by 2020; that of drafting Energy Conservation Guideline and Handbook; that of standardizing Electrical Appliances, Minimum Energy Performance Standard, and conducting Energy Manager Training Course; that of Factory Assessment tasks; that of testing Micro Cross Flow Turbine and construction of Solar Farm. Cooperation
In line with the government policy, the local and foreign investors are invited to invest in private industrial sector development, and 57 factories out of 112 factories are working with private sector.

Working with international organizations
The Ministry of Industry is planning to work with KATRI Company of ROK and also with Tsuyatomo Company of Japan. The JICA is providing techniques on dyeing of colors, method of finishing touches and management plan courses.

Development of SMEs
The Ministry of Industry has the responsibility to oversee SMEs development, and therefore, SMEs development policy was adopted in December 2015 and the law was enacted in April 2015; and the by-law was enacted in October 2016.
Central Committee and Work Committee for Development of Small and Medium Enterprises have been formed with the persons for further development of small and medium enterprises, pivotal for national economy development and promotion of social-economic status of the people.
Human Resources development
The Ministry of Industry conducted and dispatched local and foreign training courses, workshops, seminars, and trainings and five S classes (5S stands for sort, set in order, shine, standardize and sustain) as human resources development.
For the workers at the rural areas, Mobile Vocational Training Unit has been arranged for short term training. Three vehicles on Mobile Vocational Training Truck (Automobile) ; (Electrical) and (Welding) are on the move.
During the third year of incumbent government, the mobile training has been offered for 25 times to 1242 students. The Japanese language course has been offered for one year and 198 students successfully passed the course and that 40 trainees are being sent to Japan.
On 30 January 2019, the No 1 Industrial Training Center (Sinde) has been awarded with Quality Management System vide ISO 9001:2015 Certificate. The plan to open two training schools in Thaton and Monywa is in the process with the assistance of the Indian government. The No 2 Industrial School (Mandalay) is in the process of upgrading with the assistance of China.

Work in progress
Total of 776 agricultural use vehicles and 852 normal vehicles have been issued with Certificate of Approval (CoA) in the third year term.

Hazardous Chemical Prevention
Prevention of Hazard from Chemical and Related Substances Law; (2013, Pyidaungsu Hluttaw Law No, 28); (26th August 2013); The Pyidaungsu Hluttaw hereby enacts this Law; and subsequently the Prevention of Hazard from Chemical and Related Substances Rules (Myanmar and English Version)) was enacted on 12 January 2016.
Then the central prevention committee; the central supervisory committee; and state and regional committees are being formed.
Licenses are issued to companies that applied.
Socio-Economic Development
With a plan to equip and install a large paddy grain silo with the capacity of 350 tons in Maungtaw Township of Rakhine State, No 15 Heavy Industry Factory and No 26 Heavy Industry Factory in Thargaya Industrial Zone have assembled a silo and started the ignition on 19 February 2019, and then 20 bags of paddy were stored with the use of elevator. In the same day, retrieval of paddy from the silo was demonstrated.

Challenges
With the changing world of technological development, the Ministry of Industry needs to catch up with the new techniques in production sectors, and therefore, relevant capacity building courses should be exposed to them with all possible ways and means.
In conclusion, the Ministry of Industry has determined to work on the tasks such as that of research and development for the sustainable development of industrial sector including human resources development and reducing the environmental negative impact; that of the effective use of land space, the building and premises and the machineries; that of making public private partnership (PPP) with local and foreign business people who could afford technical knowhow and investment.
With these aims and objectives, the Ministry of Industry would step ahead in line with the state policy and guidelines and work with transparency for the interest of the state and the people.
Translated by UMT (Ahlon)

By Thura Zaw
Photo: Aye Than