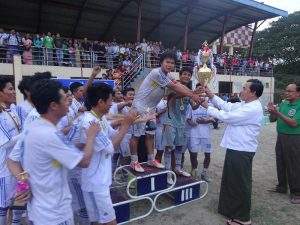 Joker team secured champion with a 5-4 win over Satan team in the final match of the University of Medicine (Mandalay) Rector’s Cup football tournament in 2015 at the sports ground of Mandalay University, here, 17 July.
Both teams could not break the deadlock of a 1-1 draw till the final whistle. In the penalty decision, Joker’s players could shoot four goals into the net of Satan while Satan’s players could translate five kicks into three goals.
Faculty members and students enjoyed the final match of the tournament.
Chairman of the sport committee of the university Professor Dr Maung Maung Htwe gave best players in places to respective winners, Pro-Rector Dr Aye Aye Chit, the second prize to Satan team and Rector Professor Dr Khin Maung Lwin, the championship trophy to Joker team.