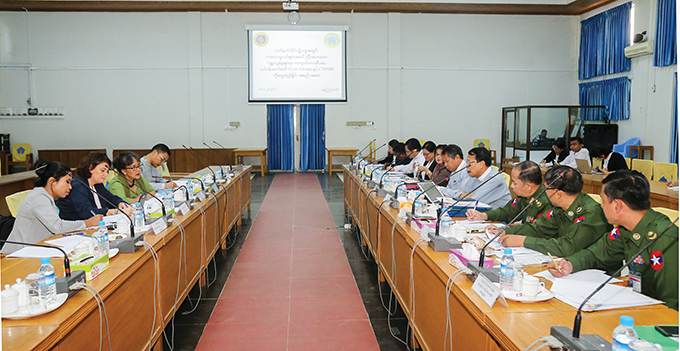 Government organizations and UN agencies discussed preventing grave violations against children in armed conflicts yesterday.
The meeting between the Committee for Preventing Grave Violations against Children in Armed Conflicts (Core Group) and the United Nations Country Task Force on Monitoring and Reporting (UNCTFMR) was held at the headquarters of Ministry of Social Welfare, Relief and Resettlement.
U Win Naing Tun, the Director-General at the Department of Rehabilitation and the Head of Core Group, explained the draft of national-level work plan to prevent children from deadly attacks and sexual assaults in armed conflicts. It was discussed by the Core Group and the UNCTFMR.
The meeting was also attended by the committee’s members from the Ministry of Foreign Affairs, Ministry of Defence, Ministry of the Office of the Union Government, Ministry of Education and Union Attorney General’s Office, together with the UNCTFMR representatives led by Dr Su Su Thar Tun (UNRC, Technical Co-chair of UNCTFMR) and Ms Cecile Marchand from UNICEF.—MNA (Translated by Aung Khin)