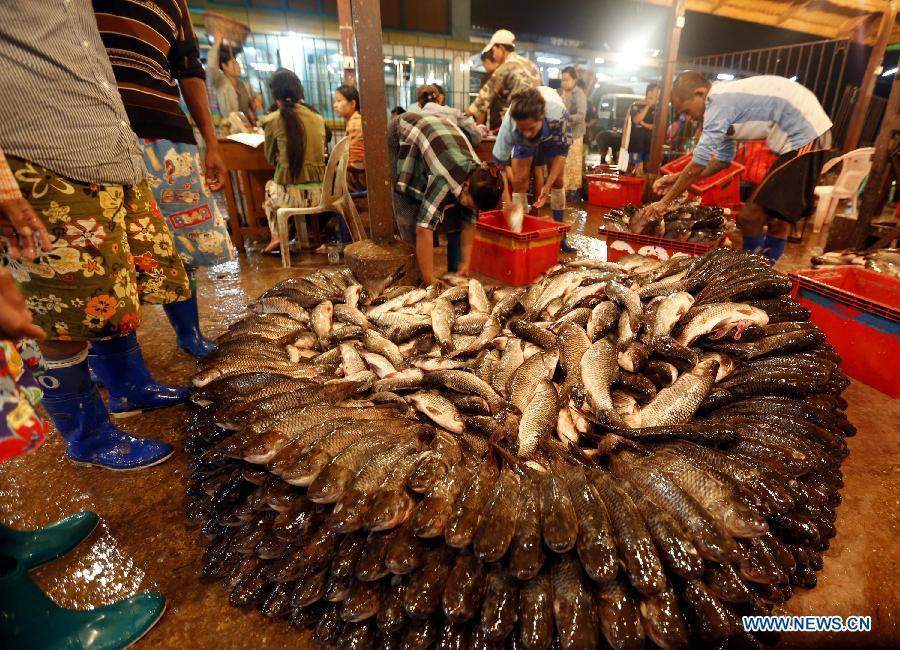 Fishmongers work at the Central Sanpya Fish Market in Yangon which is the centre point for transporting farmed fish from Ayeyawady, Yangon and lower part of Bago Regions to different parts in upper Myanmar. Photo: Credit to xinhuanet.com

The Myanmar Fisheries Federation voiced alarm Wednesday about the impact of continued flooding on fish farming in the nation’s upper part, urging aquaculture businesses in the lower country to be prepared for disaster.
MFF general secretary U Win Kyaing, said the direct impact on fish farming and disruptions to deliveries were the major concerns for the sector.
“No damage to fish farms in the upper country has been reported yet, but fish farmers in the upper and lower country have been warned that flood waters are likely to rush into areas where clusters of farms are located, with potential for great losses,” the MFF general secretary told The Global New Light of Myanmar.
Damage to roads and bridges caused by recent flash flooding has disrupted the transportation of fish and shrimp to upper Myanmar, he added.
According to the MFF, most of the roughly 20,000 acres of fish farms in upper Myanmar are situated around the River Mu in Sagaing Region’s Shwebo district, as well as Mandalay’s Madaya Township and the surrounding areas.
Myanmar has nearly 220,000 acres of fish and shrimp farms, with around 120,000 situated in Ayeyawady Region. Other farms are located in the lower part of Bago Region and Yangon Region, the MFF said.
The general secretary said fish farms in the country’s Ayeyawady Delta region, as well as Bago and Yangon regions, could face flooding early next month if heavy downpours continued.
Weather expert Dr Tun Lwin warned Tuesday of heavy rains with flash floods in the Ayeyawady Delta region within four or five days, due to the influence of the persisting depression over the Bay of Bengal.
According to the expert, Maubin Township, which is the region’s major fish farming area, is included in the list of towns facing flood risk.