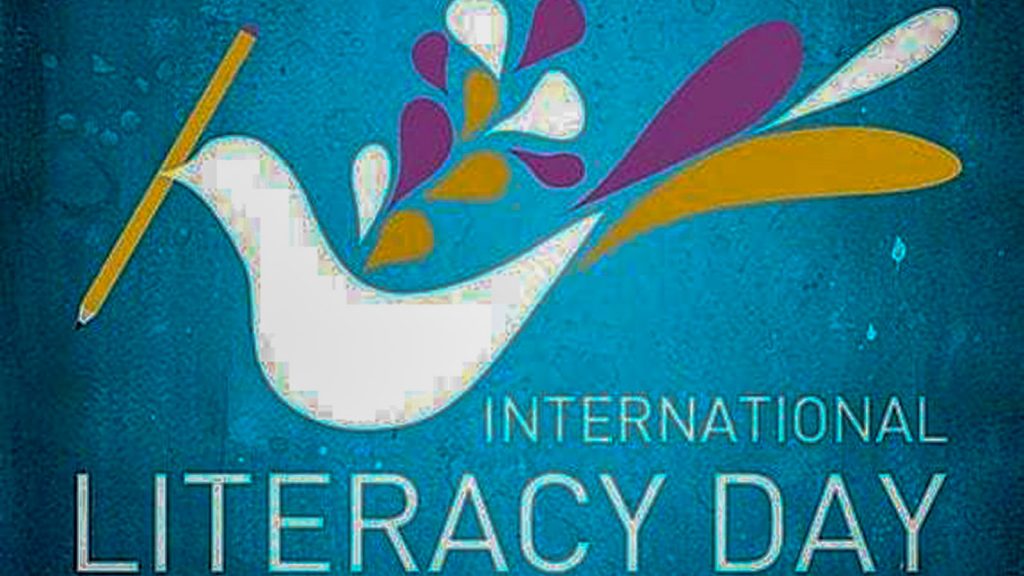 The idea of an International Literacy Day was born at the World Conference of Ministers of Education on eradication of illiteracy, held in Teheran, Iran on 8-19 September, 1965; September 8 was declared International Literacy Day by UNESCO in that year too. The aim of the day is to highlight the importance of literacy to individuals, communities and societies and the need for intensified efforts towards more literate societies.
The development of the modern world, the accession to independence of a large number of countries, the need for real emancipation of people and for the increasingly active and productive participation in economic, social and political life of human society, of hundreds of millions of illiterate adults still existing in the world, make it essential to change national education policies.
Education systems must provide for the educational training needs of both the generations who have not yet begun working life and the generations that have already begun adult without having had the benefit of essential minimum of elementary education. National Educational Plans should include schooling for children and literacy for adults as parallel elements. Since the first International Literacy Day in 1967, celebrations have taken place annually around the world, coordinated by UNESCO, countries and partners, to advance the literacy agenda at global, regional and national levels. After all ,literacy is a basic human right.
Myanmar kicked off the International Literacy Day 2017 by holding a ceremony at the Ministry of Education in Nay Pyi Taw on 8 September, with objectives of aiming to improve literacy rate across the country, provide a broad educational atmosphere to all citizens, to achieve the
UN Sustainable Goals, to ensure inclusive and equitable quality education and promote life-long learning opportunities for all by 2030. Frankly speaking , Myanmar literacy rate is relatively lower than those of other countries.
That is why the incumbent government has developed and issued the National Education Strategic Plan (NESP) which is government’ roadmap for education reform. Launched in February, 2017, it is based on the fundamental principle that everyone has the right to learn. The doubling of investment in education, increasing access to education and improving the standard of teaching have already led to achievements in education reforms.
The NESP’s overall goal is to improve student achievement through improved teaching and learning, vocational training , research and innovation. It could be achieved through:
– Equitable access to pre-school, primary, secondary, higher and alternative education
– Redesigning and launching new basic education curricula
– Improved student examination systems
– Greater investment in teacher education
– Access to technical and vocational education and training
– Strengthening the transformation of higher education
– Capacity building for education managers
Although Myanmar kicked off the International Literacy Day in 2017 in Nay Pyi Taw, Myanmar has been in close contact with UNESCO’s International Literacy Day way back in 1971. As September 8, 1971 was an International Literacy Day and the “ Central Supervisory and Coordinating Committee of the Union of Burma” was awarded the International Literacy Prize at the celebrations held on the day at UNESCO HQ in Paris, France. U Than Oo received the Mohammad Reza Pahlavi Prize as Secretary of the Central Literacy Supervisory and Coordinating Committee of the Union of Burma.
In his address, U Than Oo expressed great pleasure for awarding the 1971 Mohammad Reza Pahlavi Prize to the Central Literacy Supervisory and Coordinating Committee of the Union of Burma. He also praised students from universities and institutions of higher learning and schools; they have participated by serving as volunteer teachers and by collecting reading materials for neo-literates and for village libraries and reading rooms.
The international contributions towards the Literacy Campaign ( three R’s) came in the form of pressure lamps, torches, batteries and copybooks from UNESCO, Australia, the GDR, Great Britain and the USSR.
Such contributions were appreciated, he said.
Again UN Secretary- General U Thant sent a message to the International Literacy Day of September 8, 1971. In his message, he pointed out with great pleasure of the progress made by UNESCO in the massive world efforts to eradicate illiteracy. By the year 2000, even with the greatest efforts, approximately 15% of the world’s population will remain illiterate. We cannot build a just, prosperous and peaceful society without developing our human resources. Education, therefore, lies at the very heart of development. The illiterate is denied his fundamental right to education. He is excluded by and large from active participation in his own country and isolated from the growing global community of men and women. Those of us who are fortunate enough to read and write have a solemn obligation to help eradicate all vestiges of literacy.

IT and innovative capability
In the world, there are more than 260 million children who had never attended school and of the 617 million children six out of ten does not have the 3R skills. 750 million youths and people who have come of age did not have the 3R skills and out of these two-thirds are women. For illiterate persons the rapid development of technology is becoming a huge new challenge. Having only 3R skills are not enough to overcoming the challenges of surviving in a society, obtain work opportunity, create and achieve a good socio-economic situation.
It is necessary to know and use the information, communication and new technologies to have innovative capability.
According to 2014 census, 10.5 percent of the population in Myanmar, about 5 million, had never attended or dropped out of school for various reasons and are illiterate. Due to this, Ministry of Education established Department of Alternative Education for out-of-school and lifelong education. Basic literacy course to increasing reading rate course, income increasing course, TVET course and lifelong education courses in out-of-school primary education program for age group 10-14 years and out-of-school secondary education program for age group 15 years and above were planned to be conducted and expanded in cooperation with state/region governments.
In conclusion, Myanmar literacy rate is relatively lower than those of other countries, the incumbent government has taken a prompt action of developing the National Education Strategic Plan which is also a roadmap for education reforms. The Plan is based on the fundamental principle that everyone has the right to learn. Therefore we hope Myanmar will a bright future in the education sector.

Reference: Biography of  U Than Oo (MoI.gov.mm)