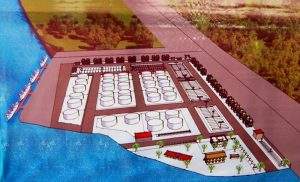 AN international-standard fuel-handling jetty to serve upper Myanmar will be built by the Myanmar Energy Sector Development Public Co Ltd at the junction of the Ayeyawady River and the Dokehtawaddy River in Phonetaw Village-tract in Amarapura Township, Mandalay Region.
“Mandalay Region is a strategic location that can link to the four corners of the country. The current jetty is in danger of fire, as it handles both cargo and fuel. The regional government has given the green light to the company,” said U Ye Myint, chief minister of Mandalay Region, at a stake-driving ceremony for the jetty, which will come with several oil tankers and office buildings.
“The site chosen for the jetty is convenient and includes fire safety provisions. The green light has been given to the public company instead of a private company for the systematic management of the jetty. As such, the people can buy quality fuel at fair prices,” the chief minister added.
The Myanmar government previously handed over state-owned fuel stations to private entrepreneurs. To ensure the systematic development of imports, storage, distribution, buying and sale of fuel, the Myanmar Energy Sector Development Public Co Ltd was founded following the merger of 52 fuel companies on January 1, 2013.
Dr Win Myint, the company’s chairperson, said: “Thanks to the formation of the public company, fuel prices have declined, and people can buy quality fuel. The government can earn more revenue. The Thilawa terminal in Yangon has been built at the main sea entrance for loading and unloading of fuels. The water route is the cheapest way to transport fuel.”
The project is being implemented on a 41.1-acre plot and covers 32 fuel tanks and four jetties. It will have the capacity to fill 136 fuel tankers and a 500,000-gallon water tank as a fire safety measure. The project will be completed within one year and will begin operations within the next six months.—Aung Thant Khaing