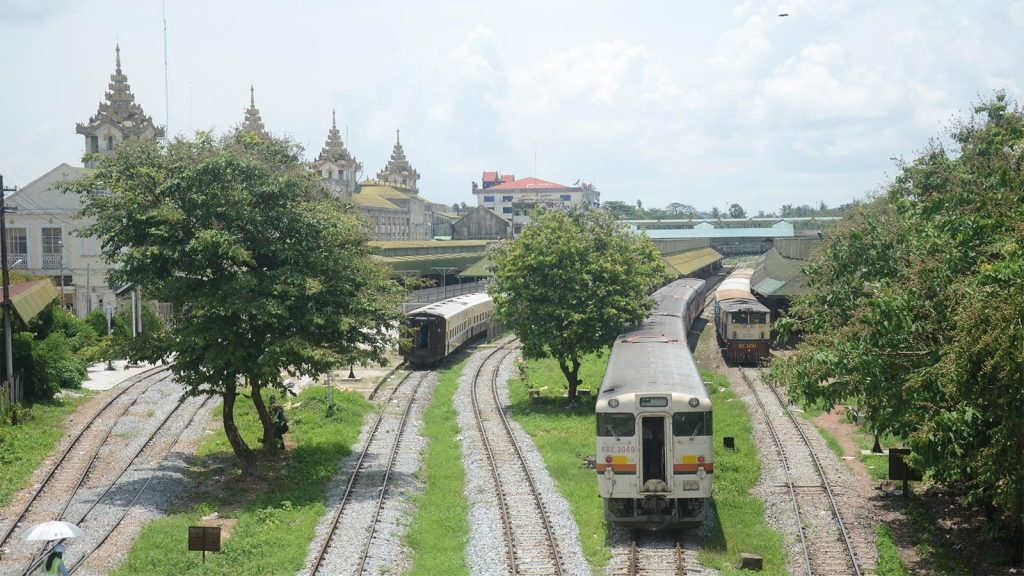 Yangon is the largest economic centre across the country and its transport systems are also essential to economic activities and quality of life of its people. At a time when Yangon is making strenuous efforts to develop a world-class metropolitan, urban public transportation plays a leading role for enabling travelling people to move from one place to another. Five main types of transport, such as private car, rail, taxi, trishaw and bus are available in Yangon. Yangon public rail transport project has been under implementation for enabling Yangonites to travel in the inner city with peace of mind.
“With the assistance of Japan, concerted efforts are being made to develop Yangon public rail transportation system,” said U Thant Sin Maung, Union Minister for Transport and Communications. The national transportation plan has been drawn up in use of the assistance from Japan. Implementations are being carried out according to prioritized order. It is also an attempt to undertake urban transportation development in a systematic manner.
The population in Yangon has reached almost 6 million. The travelling people are using vehicles and trains daily in Yangon and those relying on circular trains are about 80,000 in number every day. So as to improve circular train service, coaches, locomotives, railroads and signals are in need of upgrades.
Accordingly, plans are being made to upgrade circular railroads, stations and coaches, thanks to the assistance from Japan. Population growth will be nearly 10 million in Yangon in 2040. In order to fulfill the needs of the growing number of people, high-speed train system must be implemented at the same time.
In a bid to develop modern urban rail transportation system, plans are underway to upgrade southern and northern railroad systems of Yangon and eastern and western ones. In this state, Myanma Railways received financial and technical helps from Japan International Cooperation Agency (JICA) and pilot feasibility studies were conducted from 2016 August to 2017. Now, detailed observations are being carried out. Such observations in details will be over in 2019 September. The final report of feasibility studies will come out at the end of 2019.
As soon as the final report of feasibility studies comes into view, the working committee, the technical cooperation committee, the traffic congestion reduction committee will have to be formed in order to encourage the implementation of the modern urban rail transportation system.
The Fourth Meeting of High-Speed Train System was held at the Office of Directorate of Inland Water Transport on 29 March in 2019 during which the matters relating to high-speed train system were focused. “Detailed feasibility studies on railroads are being conducted with the intention of beginning high-speed train system in Yangon at the end of 2019,” said U Kyaw Myo, Minister for Transport and Communications.
Southern and northern high-speed railroads will be from Yangon Railway Station to the Yangon International Airport while eastern and western ones will be from Hlinethaya to Toekyoung Galay. After these high-speed railroads have been already upgraded, 11 trains from Japan will be substituted in the place of old ones.
The previous one round trip of the circular train lasted for about 2 hours and 50 minutes. If 11 high-speed trains are used to run on the upgraded high-speed railroads, it will take one hour and 50 minutes and it will save one hour. The reduced time of one hour will bring a big support to families, occupations and Yangon urban development.
If high-speed rail system of Yangon circular trains is implemented and standard high-speed circular trains are used on upgraded railroads, it will win the trust of the travelling people, railway passengers will be on the increase and Myanma Railways will earn more income.
Two high-speed railroad systems of Yangon have been under implementation for the time being. If the whole Yangon circular railroad has been already upgraded, the train speed will be at an average of 34 miles per hour. At this time, it is absolutely certain that Myanma Railways will earn more trust of the people relying on train services and it will provide the public with timely circular train services. Translated by Htut Htut (Twantay)