A speed boat on Dawei-Myeik-Kawthoung run left Dawei at dawn and reaches Myeik Jetty at 9 a.m. Before these speed boats ply this route, travellers from Dawei to Myeik or the other way round took coastal liners from Myanmar Five Stare Line, private motor launches, trawlers or cargo boats which makes the travel time longer.
Five years ago speed boats start running the Dawei to Kawthoung route. With their safe and fast service, it attracted more and more passengers. This was an improvement of transport modes in Taninthayi coastal region. However, speed boats run the routes only in the open season and the services were halted during the rainy season.
We boarded the speed boat at Myeik jetty and after storing our bags we descended into the hull where the passenger compartment was. Even though the passenger compartment had windows, the windows were water tight and sealed shut. The passenger compartment was air conditioned and the seats were arranged as on a highway express bus with entertainment provided for the passengers via a television. There were four entrances from the deck to the passenger compartment but the doors of these entrances were also closed once the speed boat was on its way. After a brief 45-minute stop at Myeik jetty, the boat sped on to Dawei. As the passenger compartment was down in the hull of the boat, except for the waves, we were unable to view much scenery. When we asked a crew member to view the scenery from the deck, the crew member replied that for safety reason, passengers were not allowed onto the deck while the boat was underway. That was why the doors were closed and we ended up either reading books or watching whatever was shown on the television. The speed boat took eight hours to make the Myeik-Kawthoung run and reaches Kawthoung at about 5 p.m. Comparing our trip on the speed boat with the trip made before the speed boat ply the route, we miss viewing the natural scenery but we gain in travelling speed.
Our first destination in Kawthoung was Bayintnaung Cape. Kawthoung was the southernmost city of Myanmar while Bayintnaung Cape was the southernmost land of the country. Steel hand rails circled the Bayintnaung Cape while the floor was tiled. As the sea breeze blow through the cape, I stood enjoying the panoramic view as my clothes flap in the wind. I found it hard to describe my feeling at that time. Remembering the vastness of Bayintnaung’s empire, I felt proud to be standing at the southernmost tip of this once great empire while humbled by the vast panoramic view where I was just a small speck.
Bayintnaung Hillock, not far from Bayinnaung Cape was the first destination of almost all visitors to Kawthoung. Bayintnaung Hillock overlooked Pak Chan River. Kawthoung and the river looked so beautiful from the hillock. The statue of King Bayintnaung pulling his sword halfway out of the sheath was also so alive. The statue was said to be the work of veteran sculptor U Han Tin. A stone pillar near the statue depicts a brief biography of King Bayintnaung in Myanmar and English written by retired director general of Department of Archaeology Professor Sayagyi Dr. Khin Maung Nyunt.
King Bayintnaung (AD 1551-1581) was born of father Minye Thihathu Mingyi Swe and mother Khin Myo Myat in 877 Myanmar Era (AD 1515). His was born Shin Ye Htut. His father was guardian of King Tabinshwehti and mother was a wet-nurse of King Tabinshwehti. Tabinshwehti and Shin Ye Htut were thus close friends since childhood. Tabinshwehti was three months and four days older than Shin Yet Htut. As they grew up, Shin Ye Htut fell in love with Khin Khin Gyi, elder sister of Tabinshwehti. When Tabinshwehti ascended the throne, King Tabinshwehti allowed his close friend Shin Ye Htut to wed his elder sister Khin Khin Gyi. 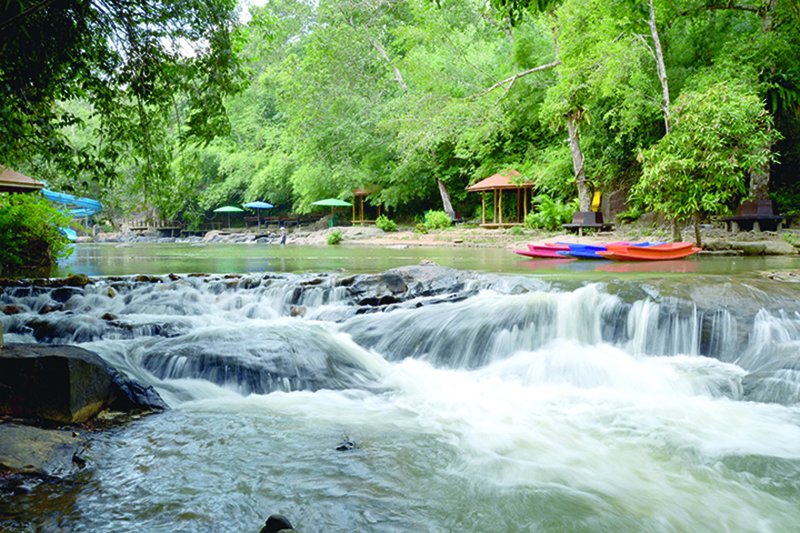 King Tabinshwehti also conferred a title of Kyawhtin Nawrahta on his faithful and brave friend Shin Ye Htut. While serving under King Tabinshwehti, Kyawhtin Nawrahta or Shin Ye Htut displayed his physical prowess as well as mental capability. He fought bravely in the victorious Naungyoe battle in 1537. King Tabinshwehti was so impressed that he took off his ring and bracelet and presented to Kyawhtin Nawrahta and also conferred Kyawhtin Nawrahta to rule Hline City. King Tabinshwehti also conferred the title of Bayintnaung on Kyawhtin Nawrahta and thus Shin Ye Htut became Bayintnaung Kyawhtin Nawrahta but was known more as Bayintnaung in Myanmar history.
Bayintnaung became crown prince in 1541 and took over the throne in 912 Myanmar Era (AD 1551). He founded the second Myanmar Empire and ruled it from Kanbawzathadi Royal Palace established at Hanthawady Bago in 1553. He expanded eastward and brings in Phitsanulok and Ayutthaya into his empire. As King of Ayutthaya presented four white elephants, King Bayintnaung was named White Elephants Owner Hanthawady King. The Second Myanmar Empire stretched from Kengtung, Lan Xang, Luang Prabang, Ayutthaya to the east and Manipur in the west.
66 years old King Bayintnaung passed away in 943 Myanmar Era (AD 1581). As I read his brief biography, my patriotic and nationalist spirit rises. I ended up bowing to the 2nd Myanmar Empire founder King Bayintnaung kept in high esteem by citizens of Myanmar.
The next day we drove north of Kawthoung by car along the Union Highway to Maliwan Village at the 25 mile post. On the way, we visited Pulontontone wooden bridge that spans across the sea and paid homage to a Buddha image made of bamboo strips. Along the way we saw oil palm plantations and areca palm farms. We also saw areca nuts dried under the bright sun.
Bama, Shan and Salon arrived and settled in Maliwan area around 1750 as they seek greener pasture along the bank of Pak Chan River. The area was a flat plain with blossoming small jasmine flowers. In Thai, Mali means small jasmine and Wan means day. So Maliwan means the day when small jasmine flower blossom. Locals say Maliwan is a land of blossoming jasmine.
Maliwan Village is home to some 4,000 people in more than 850 houses. We saw three monasteries, a primary school and a dispensary. The majority of the people work in agriculture – horticulture farms, rubber plantations and areca palm farms.
Maliwan Village host Kawthoung’s sole waterfall and hot spring. Due to poor transportation in the past, Maliwab waterfall and hot spring were not known to many people. Now a local tour company TZK was working with the government to promote the waterfall and hot spring as a tour destination. Locals as well as visitors from afar can now visit and enjoy the waterfall and hot spring as the area develops.
As we entered Maliwan resort by walking over the wooden bridge, we saw a wide body of water that was the dam-up waters of the waterfall. There were a bunch of swimmers in the water while small groups of picnickers were here and there picnicking beside the water. Some had hiked along the mountain path to reach the resort while there were some foreigners who seems to be there after visiting Kawhtoung. There were waterfalls and hot springs in Ranong, Thailand, opposite of Kawthoung. I may be bit biased but I think Maliwan waterfall and hot spring was more beautiful. At least it was more of a virgin place.
After swimming, we hiked up to the top of the waterfall along the hill route. In addition to the natural beauty that surrounds the path, near the top was a concrete bock with an X-mark on it ringed with an iron chain. Some say it was something hidden by the Japanese during Second World War but no one knows for sure.
On the way back to Kawthoung, we visited 10 Mile Village, a seaside village where marine products including the famous Pashu fish paste was available.
Kawthoung associated with smuggling in the past was now thronged with visitors visiting Pulontontone beach resort five miles from Kawthoung, 10 mile beach resort 10 miles from Kawthoung and Maliwam resort. My visit to Kawthoung will remain in my memory for long.

Translated by Than Tun Aung