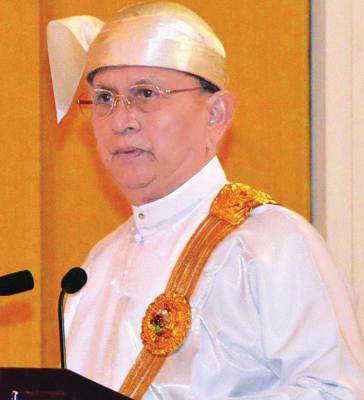 Nay Pyi Taw, 7 Aug—The following is the full text of monthly radio address delivered by President of the Republic of the Union of Myanmar U Thein Sein.

Fellow Citizens
Since the second week of July, heavy and continuous rains have led to unprecedented flooding, landslides, destruction of homes and farms, loss of livestock and loss of life in Rakhine and Chin states and Magway and Sagaing regions.
At the same time, large areas of Rakhine State were hit by Cyclone Komen that came in from the Bay of Bengal which brought additional heavy rains and wind.
The flood victims in the path of this unprecedented natural disaster had to leave behind their belongings and flee, with their young and their elderly, to areas of safety. The townships that were most impacted by the floods include: Mokaung, Kawlin, Wuntho, Kalay, most of the townships in Chin state and Rakhine state, and Pwintbyu and Salin townships in Magway region.
Local communities and responsible authorities with much empathy and conviction are currently assisting the flood victims at temporary shelters. Up to date, there are over two hundred and thirty seven thousand families who are in need of assistance.
The first responders including the local people, community leaders, municipal personnel, Red Cross, fire brigades, Tatmadaw, police and government officials have taken action to provide food, clothing and meet the needs of the flood victims. At the same time, donors, civil society organizations, monks, individuals, NGOs, and the diplomatic community have donated food, personal goods, clothing and medicines to the people in need. On behalf of our nation, I would like to sincerely thank everyone helping the flood victims.
The government has systematically undertaken relief activities to help the flood victims. The government is also prepared to dedicate all available financial, human and material resources in bringing normalcy to flood stricken areas. Although it is impossible to prevent natural disasters from occurring, the government will do everything it can to minimize the negative effects of the disaster to the public, accountably and in collaboration with all stakeholders.
The flood caused by torrential rain has destroyed railway lines, bridges and roads. Relevant government agencies have started working to prevent the disruption of communication and transportation.  The government will make paddy seeds and tractors available to the farmers in order to enable them to start cultivation of paddy as soon as floodwaters recede. The government is also ready to provide necessary assistance to the renovation or rebuilding of the houses damaged by the flood and rehabilitation of the disaster victims.
In the areas where the floodwaters have receded, some residents have to rebuild their houses.  The government will provide them with rice and financial assistance for a certain period of time.  The government is also undertaking relief activities in the areas in central and lower Myanmar where flooding has started.
Relevant government agencies are closely monitoring the water level in dams and reservoirs in order to prevent their collapse.  With great concern, I would also like to note that the water level at the Ngawun and Ayeyawady rivers has passed the danger level and that the water level in the towns of Hinthada and Nyaungdon has reached the danger level.  Since it is impossible to prevent these waters from reaching communities in these areas, I would like to urge the residents to move to safety.