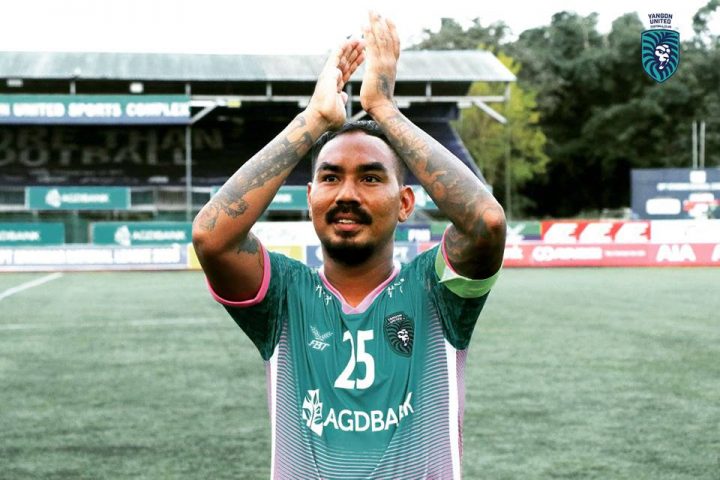 Former Myanmar national football team and Yangon United captain Yan Aung Kyaw claps his hand and expressing goodbye to his football fans across the country for his retirement at the Yangon United Sports Complex on 30 September 2020.  Photo: YUFC

Yan Aung Kyaw, former captain of the Myanmar National Football Team and defensive midfielder and captain of the Yangon United Football Club recently announced his retirement, according to the statement with the Yangon United and Myanmar Football Federation.
The 2020 season of the Myanmar National League was his last season played for his favourite club Yangon United.
The 34-year-old defensive midfielder has played for the Myanmar national team and Yangon United for almost a decade and has fulfilled his role as the team captain in both teams.
He assisted in Myanmar national team to win the third prize at the 2011 SEA Games and also helped to win the 2014 Philippine Peace Cup.
Also, the football captain has recognized as a national figure that made it to the 2016 Suzuki Cup semi-finals.
Myanmar Football Federation wished Yan Aung Kyaw, the former captain of the Myanmar national team, success in his future journey.
The Myanmar Football Federation will always be proud of Yan Aung Kyaw’s efforts for the national team, stated on their Facebook page.
Next, domestic football club Yangon United has also wished their team’s legend player whose nickname is Captain Ice on their official social media page.
“On behalf of Yangon United and hardcore fans of Yangon United, we would like to express our sincere thanks that you have done for the team throughout your professional career making appearances with the team and let the team feel the victory.
Wish you future brighter ahead. Good Luck, our Captain Ice.”
Upon his leaving, Yan Aung Kyaw said to his football fans with his cold and big sad voice that, “We fight together. We earn the victory together. We feel together. We sacrifice for the logo that printed in our hearts. And it is also time to say goodbye to the Yangon United football fans after conquering the five times Champions in Myanmar National League history, 2 times Champions in General Aung San Shield and three times Champions in Charity Cups respectively.”, the Myanmar football star added. —Lynn Thit (Tgi)