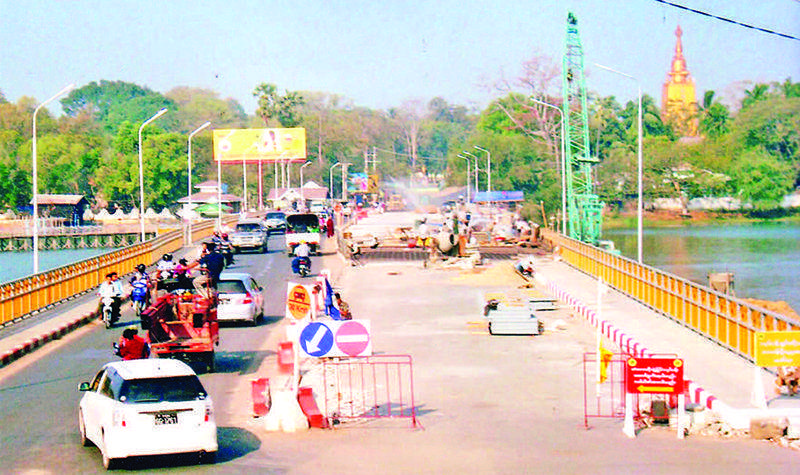 A BRIDGE across Meikhtila Lake is being extended in order to facilitate transportation. The bridge is located along the Meikhtila-Kyaukpadaung motorway in Meikhtila Township, where the Kyaukpadaung, Yangon, Mandalay, Myingan and Taunggyi motorways meet, leaving the town congested.
The existing bridge across Meikhtila Lake was first built during the Japanese occupation of Burma during World War II to join the downtown wards with Nandawgon Ward. It was 200 feet long and 24.7 feet wide and had two lanes. It also included a 660-foot approach road at the west end of the bridge. There is a high school on the west of the bridge, accommodating 4,000 students. The old bridge has been deemed unsafe for the public, as there is a heavy traffic during rush hours.
The new bridge was approved by the regional parliament.
The new bridge is being built parallel to the old one. It will be 48 feet wide and include four lanes and two pedestrian paths, each of 6 feet wide. The bridge will be able to bear 60 tonnes.
The construction of the new bridge began on 1 July 2014 and opened to vehicles on 11 July 2015.
The expansion of the new bridge began in November 2015 and is now 90-per cent complete. The construction of the approach road from the west of the bridge is complete. The roads are now being tarred, and handrails installed.
The expansion cost K 2.700 billion (US$2,182,700). The expansion of the new bridge is will be finished March.