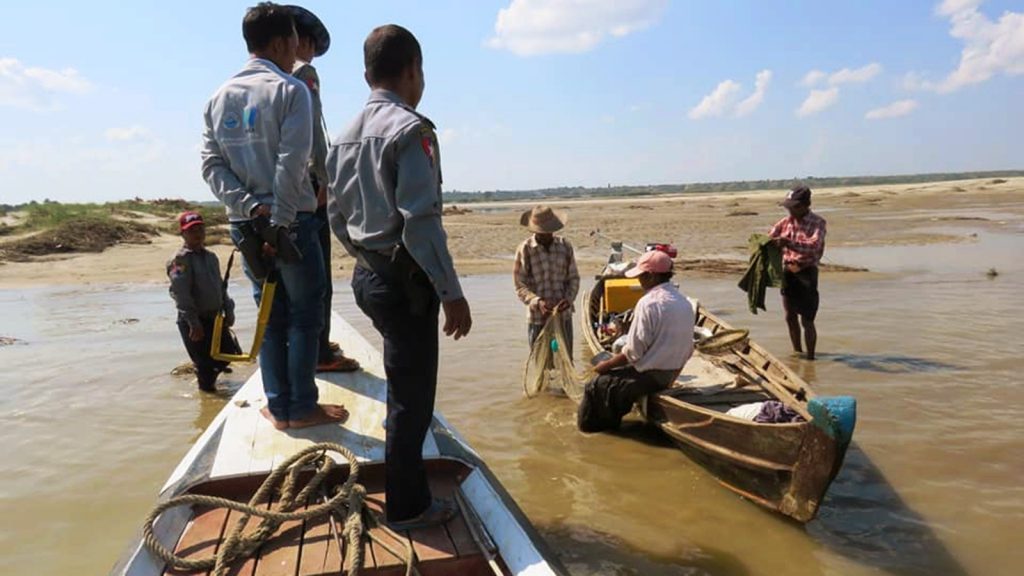 With a team conducting two rounds of inspections every month, the practice of electro-fishing is gradually declining in the area from Mandalay to Bhamo in the Ayeyawady dolphin protection zone, according to U Kyaw Hla Thein, who is part of the Wildlife Conservation Society’s dolphin conservation project.
A combined team, with members drawn from the Fisheries Department, the Wildlife Conservation Society, the Marine Police Force (Mandalay), and other concerned organizations, is conducting the inspections and also organizing awareness campaigns.
“The main reason for the death of dolphins in the Ayeyarwady protection zone is electro-fishing, and most fishing vessels are catching the fish illegally. Moreover, electro-fishing cases have been seen even in the daytime. With the Marine Police Force taking strict action and conducting awareness campaigns since 2017, electro-fishing has decreased slightly,” he added.
In 2018, 10 fishermen were arrested and 32 fishing vessels, 37 electric fishing nets, 31 batteries, and 19 machines were seized between the Mandalay and Kyaukmyaung dolphin protection zone. Action was taken against eight more fishermen, and 18 fishing vessels, 8 electric fishing nets, 18 batteries, and 9 electric machines were confiscated. According to data from January to July, the Mandalay Marine Police Force has taken action against 24 fishing boats for electro-fishing.
“At present, electro-fishing has nearly ceased due to the cooperation between the regional Fisheries Departments and other departments. But, a few instances of electro-fishing are still being witnessed. We carry out inspections twice a month, and sometimes we receive reports of electro-fishing during periods when there are no inspections,” he said.
“The conservation of the Ayeyarwady dolphins can boost tourism and create job opportunities for local people. It is also linked to the Myanmar Sustainable Development Plan,” he added.
Six dolphin deaths were recorded in 2018. In February and May, two dolphins were reportedly killed out of the total 72 in the 400 kilometres area between the Mandalay and Bhamo dolphin protection zone. Dolphin breeding was also observed in the month of May. According to data recorded in February, 2018, there were 76 dolphins in the 400 kilometers area from Mandalay to Bhamo, which forms a part of the Ayeyarwady dolphin protection zone. — Khine Set Wai (Translated by La Wonn)