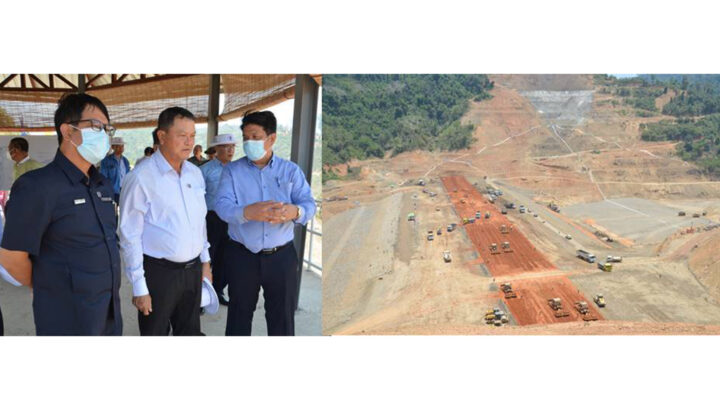 The projects to generate electricity must be implemented with momentum through renewable energy such as hydropower and solar power so as to meet the more demands, said Union Minister for Electricity and Energy U Aung Than Oo in meeting with officials of Thahtay hydropower project on 8 May.
During his tour of the project site on Thahtay Creek, 12 miles northeast of Thandwe of Rakhine State, the Union Minister inspected progress of implementing the project and functions of the 230KV Taungup (Baryay) main power station.
In his instructions, the Union Minister urged them to systematically use the machinery to be installed at the project site, make utmost efforts for timely completion of the project and emphasize contribution to local tourism industry and conservation of the environments.
The project which started in 2008-2009 financial year will build a 111-megawatt power station to generate 386 million kilowatt hours per year to increase electricity to Rakhine State and feed electricity to the national grid.
So far, the project has completed by 65.48 per cent. Efforts are being made to finish the project in 2024.
Likewise, Upper Kengtawng hydropower project has completed by 63.99 percent, Upper Yeywa hydropower project 48.68 percent and middle Paunglaung hydropower project, 6.14 percent.
The Union Minister viewed round the site for resettlement of the local people who moved from Payit and Yaykauk villages involved in the project area and instructed officials to fulfill their needs.
He also inspected the 230-KV Taungup (Baryay) main power station and left instructions on inspection for transformers and accessories of the main power station for minimizing the outage of electricity.
On 7 May, he met with Rakhine State, district and township level engineers and staff at Thandwe District Electrical Engineer Office and urged them to arrange full supply of electricity to respective regions.—MNA