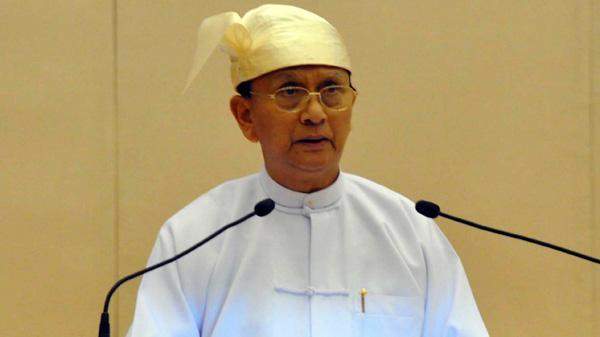 he following is the full text of the monthly radio message delivered by President U Thein Sein.

I would like to inform all of you about the recent changes and developments that have taken place in our country during the month of November just as I have done previously on this radio program.
This month, I especially would like to talk about the current political situation and to urge everyone to viewthis situation in light of ongoing efforts to successfully implement and sustain reforms.In particular, our collective desire for political forces to overcome a culture of divisive politics and adopting a conciliatory and unified approach to addressing issues. I urge all political forces to embrace this vision as they undertake their objectives.
Since the current reforms comprise of undertaking liberalization in concert with nurturing democratic practices, we have had to face and overcome great challenges. When addressing these challenges, we must not ignore issues that demand immediate attention or lose sight of the goal of long-term sustainability of the reforms. Because we are still laying the foundation for sustaining reforms long-term, some have said that reforms have stalled or halted.For my part, I continue to strive sincerely, and with full commitment and focus to achieving meaningful and practical progress.
In November, our nation successfully hosted the ASEAN and East Asia summits – the largest gathering of global leaders our nation has ever hosted. Leaders from neighboring South East Asian countries were joined by leaders from India, China, United States, Russia, South Korea, and Australia. By successfully hosting these prestigious summits, our country has reached an important milestone in its efforts to become a respected member of the international community.
In addition to global leaders, thousands of diplomats, representatives of multinational companies, and international media visited our country during the summits. The international community’s interest in our country is also growing. Today, our country’s foreign policy is to have friendly relations with other countries. Although some countries may have different opinions of our reforms, there is also goodwill for our country to secceed. These positive outcomes are not accidental, and it is important to strengthen these foreign relationships and to prevent any harm to these links.
Myanmar is also working to advance integration within the ASEAN region. Less developed countries like ours must proceed carefully since ASEAN integration should benefit all ASEAN nations including its poorest and less developed members.
With respect to the peace building efforts, despite recent armed clashes, the basic elements of nationwide peace are in place. All the ethnic armed groups have agreed to work towards signing a nationwide ceasefire agreement, and the Union Peace Working Committee and the Nationwide Ceasefire Coordination Team (NCCT)are continuing their discussions. There is firm political agreement on building a federal union. In addition, all sides have agreed that during political dialogue except for succession and issues harming sovereignty, all other issues may be discussed.
There are disagreements and opposition to the National Education Law. Regulations and by-laws for the law, which was passed by the Union Parliament, are still being drafted. I understand that preparations are being made so students, teachers, officials, and various other groups can provide input during the drafting process. I accept that the law is incomplete as the required regulations and by-laws have yet to be drafted. However, this is the first time in our country’s history where education-related legislationis being discussed in an inclusive and representative manner. This is an example of a practical and beneficial undertaking.
Therefore, I urge, continued extensive and practical consultations to address disagreements and to draft regulations. I have already instructed the relevant ministries and universities to facilitate this process.
This past month, due to high demand for US dollars, there was volatility in the exchange markets. There will be confidence in the business environment only when there is stability in the exchange markets. Therefore, the Central Bank worked with other banks to stabilize the situation. The Central Bank’s capacity to act decisively is the positive result of administrative and institutional reforms our government initiated as part of the comprehensive reform process.
The telecommunications sector has also experienced reforms. Specifically, the reforms have resulted in a sector that is now competitive, and is engaged with the broader international market. Moreover, because of the reduction of red tape, telephone and Internet services are now more affordable and easily available. Although the telecom sector may not be up to international standard yet because the basic infrastructure is being built, the public is able to experience at least some of the services enjoyed by people in neighboring countries. The services will become world-class soon, after the infrastructure work is completed.
On November 26th, I met with leaders of political parties and discussed the current political situation, peace building efforts and other developments. As I said at the beginning of this address, we have faced, and will continue to face challenges sustaining and successfully implementing reforms. I pledge to work together with all national forces to find common solutions to these challenges.
I would like to conclude by reaffirming my commitment to achieving peace, promoting economic development and building a better future for future generations.