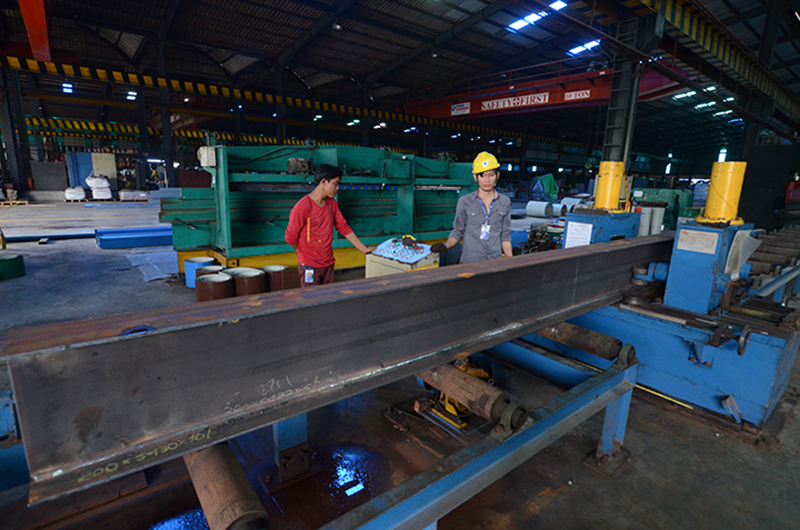 Steel is an essential material in the industrial products and in building infrastructures. If Myanmar can produce steel on commercial scale, we will be able to save our foreign exchange used in importing steel products and build an industrialized country. In fact, the country has large deposits of iron ore.
Myanmar set up steel mills for the said purpose in the past but they were not successful as they cannot compete with their foreign counterparts in quality, price and designs. They also faced high production costs, dwindling production capacity and financial losses. Hence, the country had to stop them all.
The suspended No. 1 Steel Mill was set up with a total capital of K 1795505 million and Euros 1054 million in Myingyan in the central part of Myanmar. The annual expense for monthly salaries of 828 in-service employees and six retired persons is over K 1805 million. So the suspended mill showed a loss of over K 25090 million in fiscal year 2017-2018.
So the fourth regular session of the second Pyidaungsu Hluttaw approved the suspension of 2 steel mills and other 22 factories that are showing losses annually for five success years. The Ministry of Industry owned 112 factories and workshops and of them, 57 are private-government joint-ventures, 31 are operating under the ministry and 24 are suspended factories.
“These factories are showing annual loses as their production cost are high and their products are not competitive in the market. Besides, they have the expenditure for employee salaries, maintenance cost, and interest for foreign loans. So, they are facing losses annually,” said MP U Aung Kyaw Kyaw Oo.

The Ministry of Industry showed a loss of K 89741 million in fiscal 2015-2016, K 94850 million in 2016-2017, and K 66266 million in 2017-2018. The 24 suspended factories of the ministry have 6698 employees and the Union is spending Ks 1243 million annually from its coffers to pay their salaries.
Because of the long-term termination of operations, factories are facing wear and tear while the Union is facing financial losses. Moreover, morale of employees is falling and the industrial sector is facing s sharp drop in production. At the 13th regular session of the second Pyithu Hluttaw, MP U Bo Gyi of Chauk Township Constituency submitted a motion, suggesting joint-venture and privatization programs for the suspended factories of the government as a means to reduce the unnecessary expenditure of the Union and if possible to gain profits.
“Although the cost of loan interest payments, salary payments, production and maintenance expense are high, the factories are operating at a loss. As a transparent means to turn them into profitable businesses has not yet seen, I have presented this proposal,” he explained.
Other MPs held discussions in support of the motion. As regards the motion, Deputy Minister for Industry Dr. Min Ye Paing Hein promised the adoption of definite and clear policies and procedures in finding the best privatizing and joint-venturing means for the suspended industries.
After studying the factories operating under joint-venture programs, the ministry would try to seek ways to serve the interest of the country best, the deputy minister assured, and added that the Industry Ministry would cooperate with the relevant organizations including the Ministry of Planning and Finance in effectively managing and settling the issue of domestic and foreign loans.
“The Industry Ministry will join hands with Project Bank and Public-Private Partnership (PPP) Center to assess the possible areas where privatization process can yield profitable results. It will sell the factories that are not economically viable,” he said.
The Lower House than passed the motion.
“We should seek new and innovative ideas, instead of out-of-date or conventional means for this privatization project. We should make assessment of the situation from the technological, financial and economic points of view in adopting feasible means to lessen losses by cutting unnecessary expenses and turn unprofitable factories into profitable businesses,” an expert suggested.
Basic Principles of the Union of the Chapter I of the 2008 State Constitution stipulates sections 19, 30 and 31, which respectively states as follows: “The Union shall provide inputs, such as technology, investments, machinery, raw materials, so forth, to the extent possible for changeover from manual to mechanized agriculture.” “The Union shall provide inputs, such as technology, investments, machinery, raw materials, so forth, to the extent possible, for development of industries.” “The Union shall, to the extent possible, assist to reduce unemployment among the people.”
“If we can set up public-private joint-venture industries under a common interest, we will be able to use the already available infrastructure and skilled workforce effectively,” said MP U Aung Kyaw Kyaw Oo.
A nation needs industrial development. So, the rerunning of the factories may fulfill the local demand, increase the volume of import-substitute goods, thereby reducing foreign exchange expenses of the country, generate employment opportunities, pave a channel to transfer technology, and improve staff capacity and hopes.
We must take into account economically viable means, market-friendly ways as the flourishing of industries will generate jobs and income of the people, and finally towards the national economic growth. What’s more, we can create a pleasant environment for our people alongside the rise in exports and per capita income, said MP U Kan Myint.