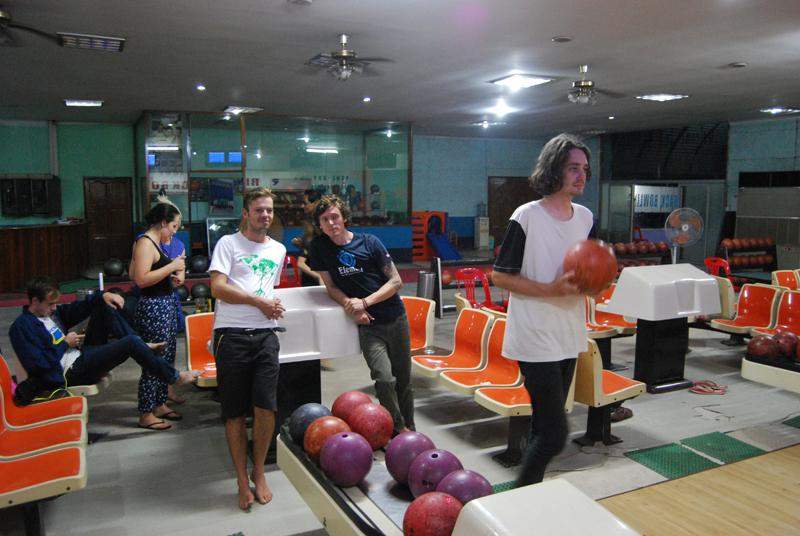 Right Track Lanes offers Yangon residents more than one way to have a good time.

Aung Myo, the director of Right Track Lanes, one of Yangon’s two bowling alleys, doesn’t care about profits. He doesn’t do any marketing. Some days, the bowling alley stays empty all day, without a single customer. Aung Myo is also unconcerned about aesthetics; the linoleum that used to cover the floors of his establishment has mostly peeled back, revealing the concrete beneath. These are the marks of a man for whom bowling is not a livelihood, but a passion.
Right Track Lanes came under Aung Myo’s leadership unexpectedly. The bowling alley was opened by a group of South Korean investors who partnered with the Myanmar government in 1999 with the aim to give civil servants a place to bowl.
Aung Myo’s parents owned the trucking company the Koreans hired to move machinery into the alley. The investors asked Aung Myo, who had never bowled before, to be their assistant. From that moment, Aung Myo began learning the ins and outs of running a bowling alley. He also spent two years in Seoul, ultimately mastering the roles of technician, mechanic and electrician. When the government realised Aung Myo could run the place himself, they ended their partnership with the South Korean investors, three of whom Aung Myo says were making US$3,000 per month, and appointed Aung Myo to take their place.
Aung Myo also mastered bowling during his time at Right Track, or at least enough to serve as the coach of Myanmar’s bowling teams, the Special Olympics men’s and women’s teams. He and the Myanmar women’s team won silver medals at the Special Olympics in Australia in 2013, and two of his players won bronze medals at the SEA Games that same year. They all practice at Right Track Lanes on Saturday mornings.

But bowling is still not popular in Myanmar, Aung Myo said in an interview with The Global New Light of Myanmar.
“Myanmar people don’t want to pay 2,000 kyats for a round of bowling. They want to go to the KTV,” he said.
So he doesn’t try very hard to attract new players. For those who don’t already know about the place, the only evidence of Right Track’s existence is an oversized bowling pin on a two-metre pedestal on an otherwise nondescript section of Lay Daung Kan Road in Tamwe Township. The pin leads curious potential bowlers down a long, shaded lane that ends in a clearing surrounded by trees. The only building in the clearing is Right Track Lanes.
“I would like to see a busy night every night,” Aung Myo said. “I also like seeing foreigners here.”
Rather than renting out shoes and charging more for games, Right Track Aung Myo has designed Right Track to serve as a venue for people who know what they’re looking for. Serious bowlers can come in and play a serious game, but the alley also serves cheap Myanmar Beer and plays top-40 pop songs for those looking for a more social experience, both of which Aung Myo takes pride in.
“Bowling is an indoor game, which is good for Myanmar. It also allows many people to play at the same time. And it doesn’t cause tension. People can have conversations, drink beer and relax. It’s harmless,” he said.
Right Track Lanes is open every day from 9am to 10pm, and it usually stays open later for people who are having a good time.