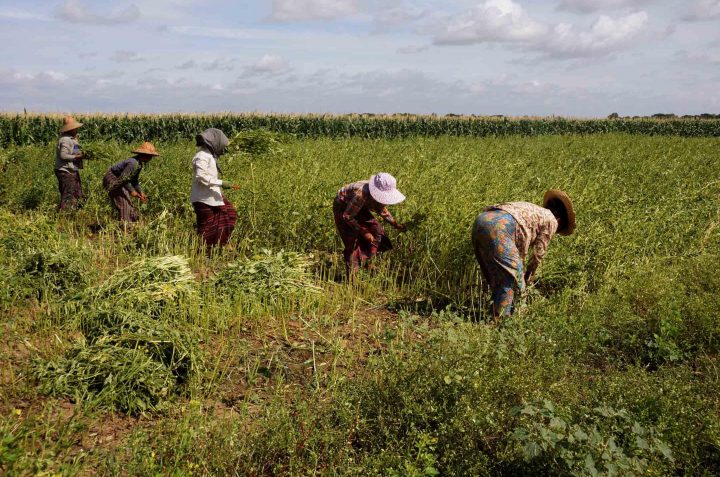 The price of black sesame seeds rose a bit in the third week of September as it is highly demanded in the approaching China mid-autumn festival, as per Mandalay market data.
The prevailing prices of sesame move in the range of K140,000 to K190,000 per three-basket bag depending on the quality and varieties of sesame. The market sees a slight increase in K5,000-8,000 per bag compared with the previous week.
The prices of sesame dropped by K10,000 per bag owing to the closure of Shweli (Ruili) checkpoint on 15 September, said a trader from Mandalay market.
This year, the sesame prices drop by over 20 per cent compared with the prices in the previous years due to the COVID-19 negative impacts, he pointed out.
Typically, Myanmar exports about 80 per cent of sesame production to foreign markets. China is the primary buyer of Myanmar sesame, which is also shipped to markets in Japan, South Korea, China (Taipei), UK, Germany, the Netherlands, Greece, and Poland among the EU countries.
The EU markets prefer organic-farming sesame seeds from Myanmar, said an official from the Trade Promotion Department. Japan prefers Myanmar black sesame seeds, cultivated under good agricultural practices (GAP), and purchases them after a quality assessment. Black sesame seeds from Myanmar are also exported to South Korea and Japan. Meanwhile, China buys various coloured sesame seeds from the country.
Sesame is cultivated in the country throughout the year. Magway Region, which has gained a reputation as the oil pot of Myanmar, is the leading producer of sesame seeds. The seeds are also grown in Mandalay and Sagaing regions.
Of the cooking oil crops grown in Myanmar, the acreage under sesame is the highest, accounting for 51.3 per cent of the overall oil crop plantation.
The volume of sesame exports was registered at over 96,000 metric tons, worth $130 million, in the financial year 2015-2016; $100,000 tonnes, worth $145 million, in the 2016-2017FY; 120,000 tonnes, worth $147 million, in the 2017-2018FY; 33,900 tonnes valued $43.8 million in the 2018 mini-budget period, and 125,800 tonnes, worth $212.5 million in the 2018-2019FY, the trade data of Central Statistical Organization indicated. — Ko Htet (Translated by Ei Myat Mon)