A delegation representing the Union Government assisted in providing accommodation to 35 Mro and Daing Net families from Bangladesh at Thitonna Gwason Village in Maungtaw Township, Rakhine State, yesterday.
The delegation led by Dr. Win Myat Aye, the Chairman of the Committee for Implementing Recommendations on Rakhine State and Union Minister for Social Welfare, Relief and Resettlement, comprised of Rakhine State Chief Minister U Nyi Pu, Deputy Minister U Soe Aung and other officials, flew to the village yesterday by helicopter and met with Mro ethnic people.
After the meeting, the Union Minister inspected the progress of construction of housing for the Mro ethnic people and for their resettlement at the village.
Following the visit to Thitonna Gwason Village, the delegation went to Khontaing Village and inspected the progress of construction of houses by the Daw Khin Kyi Foundation and Ministry of Border Affairs. The Daw Khin Kyi Foundation is a non-profit charitable organization that seeks to achieve its goals of promoting the health, education and living standards of the people of the country irrespective of ethnicity, race or religion, In the afternoon, Union Minister Dr. Win Myat Aye and officials visited Ngakhuya Village, which saw a fire outbreak on 12 April, and inspected a temporary settlement for the fire victims. At the meeting with the fire victims, the Union Minister pledged that his Ministry would assist in rebuilding houses for them as soon as possible. During the visit to the village, the authorities also inspected the Ngakhuya Reception Centre. The delegation also visited the Hla Phoe Khaung Transit Centre and inspected its readiness for repatriation and progress in completing the remaining houses for returnees.
When the delegation arrived back in Maungtaw, Union Minister Dr. Win Myat Aye, Chief Minister U Nyi Pu and other officials met with a five-member family, which had recently returned from Bangladesh at the Maungtaw District General Administration Department and provided cash assistance to them.
During his tour of Sittway, Union Minister Dr. Win Myat Aye and party visited the Khaungdokkar camp for displaced persons and held a meeting with officials of the camp over closing the camp and resettling displaced persons.
In the evening, the Union minister held a meeting with the Rakhine State Cabinet and departmental officials at the state government’s meeting hall relating to development matters in Rakhine State. He called for local authorities to step up efforts for the closing of the camps for IDPs (Internally Displaced Persons), which were opened in 2012, and for raising awareness about the benefits of holding National Verification Cards in the state. Union Minister Dr. Win Myat Aye and local authorities also discussed promoting efforts for better education, resettlement, livelihood and farming for NV card holders in the state. They also discussed matters related to implementation of projects to which the Indian government would fund US$5 million annually for five years.—Myanmar News Agency 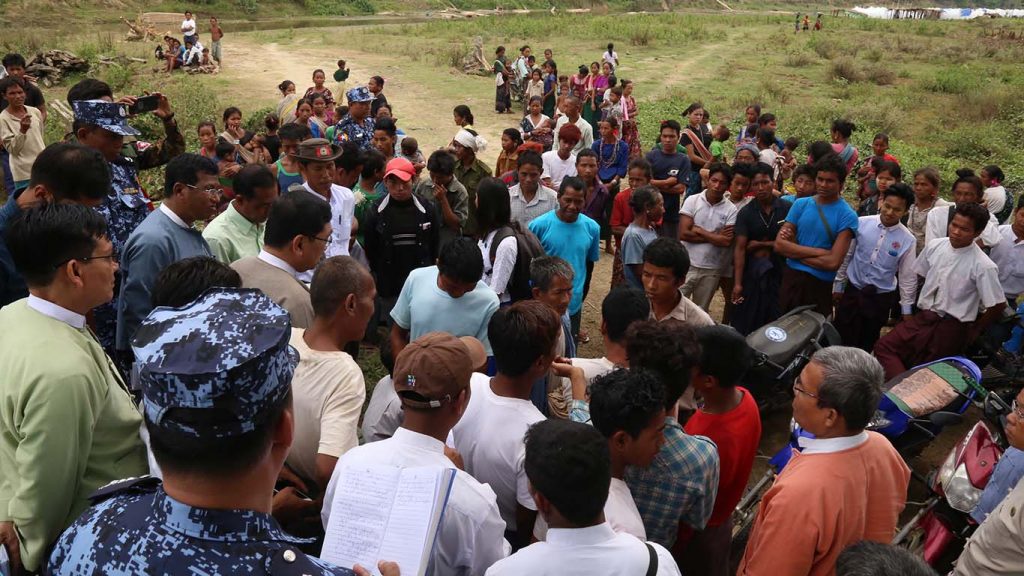