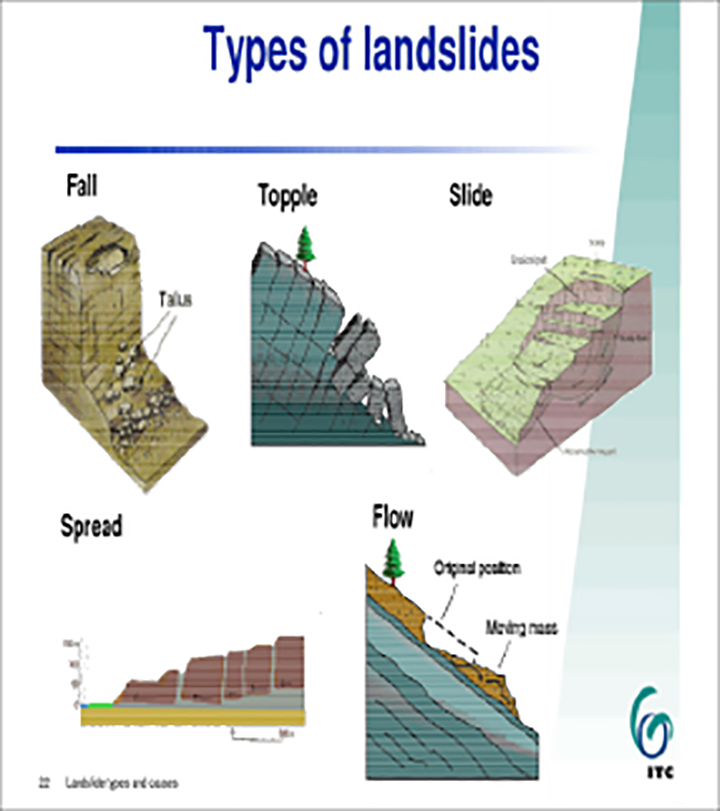 A widely accepted definition characterizes natural hazards as “those elements of the physical environment, harmful to man and caused by forces extraneous to him.”(Burton et.al.,1978). More specifically, the term “natural hazard” refers to all atmospheric, hydrologic, geologic (especially seismic and volcanic), and wildfire phenomena that, because of their location, severity, and frequency, have the potential to affect humans, their structures, or their activities adversely. The qualifier “natural” eliminates such exclusively manmade phenomena as war, pollution, and chemical contamination. Hazards to human beings not necessarily related to the physical environment, such as infectious disease, are also excluded from consideration here.
Notwithstanding the term “natural,” a natural hazard has an element of human involvement. A physical event, such as a volcanic eruption, that does not affect human beings is a natural phenomenon but not a natural hazard. A natural phenomenon that occurs in a populated area is a hazardous event. A hazardous event that causes unacceptably large numbers of fatalities and/or overwhelming property damage is a natural disaster. In areas where there are no human interests, natural phenomena do not constitute hazards nor do they result in disasters. This definition is thus at odds with the perception of natural hazards as unavoidable havoc wreaked by the unrestrained forces of nature. It shifts the burden of cause from purely natural processes to the concurrent presence of human activities and natural events.
Although humans can do little or nothing to change the incidence or intensity of most natural phenomena, they have an important role to play in ensuring that natural events are not converted into disasters by their own actions. It is important to understand that human intervention can increase the frequency and severity of natural hazards. For example, when the toe of a landslide is removed to make room for a settlement, the earth can move again and bury the settlement. Human intervention may also cause natural hazards where none existed before. Volcanoes erupt periodically, but it is not until the rich soils formed on their ejecta are occupied by farms and human settlements that they are considered hazardous. Finally, human intervention reduces the mitigating effect of natural ecosystems. Destruction of coral reefs, which removes the shore’s first line of defence against ocean currents and storm surges, is a clear example of an intervention that diminishes the ability of an ecosystem to protect itself. An extreme case of destructive human intervention into an ecosystem is desertification, which, by its very definition, is a human-induced “natural” hazard.
Potentially Hazardous Natural Phenomena
Atmospheric
Hailstorms
Hurricanes
Lightning
Tornadoes
Tropical storms
Seismic
Fault ruptures
Ground shaking
Lateral spreading
Liquefaction
Tsunamis
Seiches
Other Geologic/Hydrologic
Debris avalanches
Expansive soils
Landslides
Rock falls
Submarine slides
Subsidence
Hydrologic
Coastal flooding
Desertification
Salinization
Drought
Erosion and sedimentation
River flooding
Storm surges
Volcanic
Tephra (ash, cinders, lapilli)
Gases
Lava flows
Mudflows
Projectiles and lateral blasts
Pyroclastic flows
Wildfire
Brush
Forest
Grass
Savannah 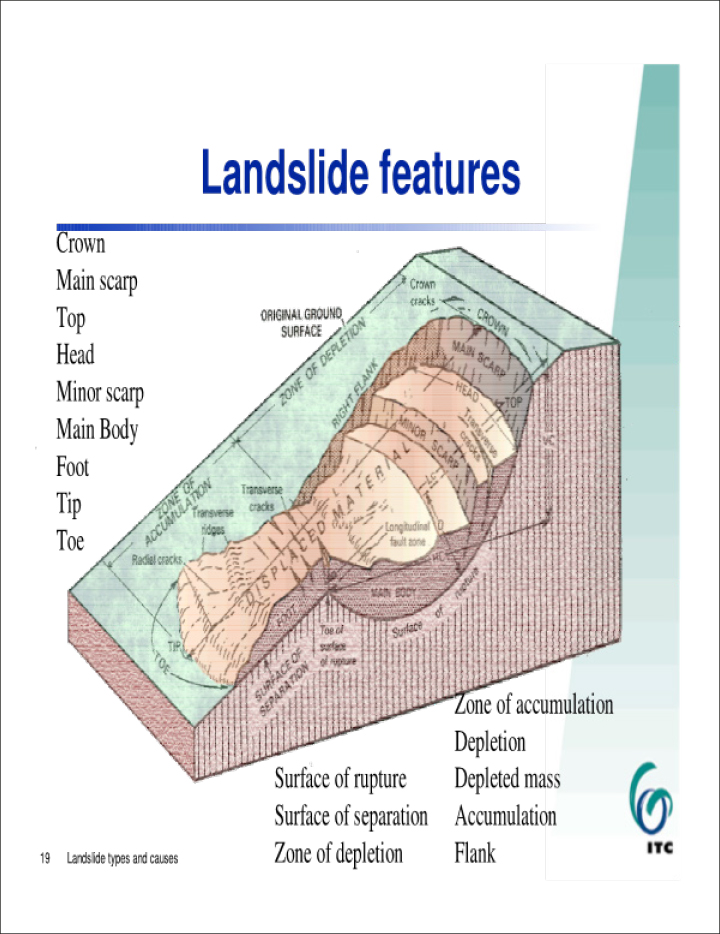 Of all above natural hazards landslides are a serious geologic hazard common to almost all the country on the continents . As people move into new areas of hilly or mountainous terrain, it is important to understand the nature of their potential exposure to landslide hazards, and how cities, towns, and counties can plan for land-use, engineering of new construction and infrastructure which will reduce the costs of living with landslides.
Although the physical causes of many landslides cannot be removed, geologic investigations, good engineering practices, and effective enforcement of land-use management regulations can reduce landslide hazards. It is also important to understand the science of landslides – their causes, movement characteristics, soil properties, the geology associated with them, and where they are likely to occur.
Myanmar occupied 676,578 square kilometres (261,227 sq mi) in size. Approximate half of the landscape is covered in hilly terrains, plateaus and mountain ranges. Annual rainfall in the delta region is approximately 2,500 mm (98.4 in), while average annual rainfall in the Dry Zone in central Myanmar is less than 1,000 mm (39.4 in). Global warming means more evaporation from the oceans, build-up of more rain clouds and increase rainfall in the future. Central Myanmar lies within the complex zone of collision between the tectonic plates called Indo-Australian Plate and the Eurasian Plate. The collision is highly oblique and much of the plate convergence is accommodated by right lateral strike slip dextral faults, of which the largest is the north-south trending Sagaing Fault and well known earthquakes occurred during 2011 and 2012. There is a real potential for causing deep seated and large scale landslides. High risk areas should be inspected and measures taken to save lives and prevent disasters (Michael Tin, 2017).

Landslides
The term landslide includes slides, falls, and flows of unconsolidated materials. Landslides can be triggered by earthquakes, volcanic eruptions, soil saturated by heavy rains or groundwater rise, and river undercutting. Earthquake shaking of saturated soils creates particularly dangerous conditions. Although landslides are highly localized, they can be particularly hazardous due to their frequency of occurrence. Classes of landslide include:
– Rockfalls, which are characterized by free-falling rocks from overlying cliffs. These often collect at the cliff base in the form of talus slopes which may pose an additional risk.
– Slides and avalanches, a displacement of overburden due to shear failure along a structural feature. If the displacement occurs in surface material without total deformation it is called a slump.
– Flows and lateral spreads, which occur in recent unconsolidated material associated with a shallow water table. Although associated with gentle topography, these liquefaction phenomena can travel significant distances from their origin.
The impact of these events depends on the specific nature of the landslide. Rockfalls are obvious dangers to life and property but, in general, they pose only a localized threat due to their limited areal influence. In contrast, slides, avalanches, flows, and lateral spreads, often having great areal extent, can result in massive loss of lives and property. Mudflows, associated with volcanic eruptions, can travel at great speed from their point of origin and are one of the most destructive volcanic hazards.
There is a wide variety of names for the denudational process whereby soil or rock is displaced along the slope by mainly gravitational forces.
• “mass movement”
• “slope movement”,
• “landslide”
Landslide: “the movement of a mass of rock, debris or earth down the slope” (Cruden, 1991).
The occurrence of slope movements is the consequence of a complex field of forces (stress is a force per unit area) which is active on a mass of rock or soil on the slope. Movement occurs when the shear stress exceeds the shear strength of the material. Difference with soil erosion. The consequence of these forces in conjunction to the slope morphology and the geotechnical parameters of the material define together the specific type of landslide which might occur.

Landslide definition
Landslide is defined as the movement of a mass of rock, debris or earth down the slope, when the shear stress exceeds the shear strength of the material.

Landslide causes
The occurrence of landslides is the consequence of a complex field of forces (stress is a force per unit area) which is active on a mass of rock or soil on the slope. Basically, the two main determinative parameters are:
• An increase of shear stress
• A decrease of material strength
An increase of shear stress
• Removal of lateral and underlying support (erosion, previous slides, road cuts and quarries)
• Increase of load (weight of rain/snow, fills, vegetation)
• Increase of lateral pressures (hydraulic pressures, roots, crystallisation, swelling of clay)
• Transitory stresses (earthquakes, vibrations of trucks, machinery, blasting)
• Regional tilting (geological movements).

Economic losses due to landslides

Hutchinson’s (1988) Classification of landslides:
• Rebound. When ground is unloaded, either artificially by encavation or naturelly by erosion, the unloaded area responds, initially elastically and subsequently by slow swelling (Peterson, 1958)
• Creep. Any extremely slow movements which are imperceptible except through long-period measurement
• Sagging of mountain slopes. A general term for these deep-seated deformations of mountain slopes, which, in their present state of development, do not justify classification as landslides.
• Landslide. Relatively rapid downslope movements of soil and rock, which take place chararcteristically on one or more discrete bounding slip surfaces which divine the moving mass.
• Debris movement of flow like form. Term covering five types of movement of flow-like form, which differ markedly in mechanism: non-periglacial mudslides, periglacial mudslides, flow slides, debris flows and sturzstroms.
• Topple. A movement that occurs when the vector of resultant applied forces falls through, or outside a pivot point in the base of the affected block.