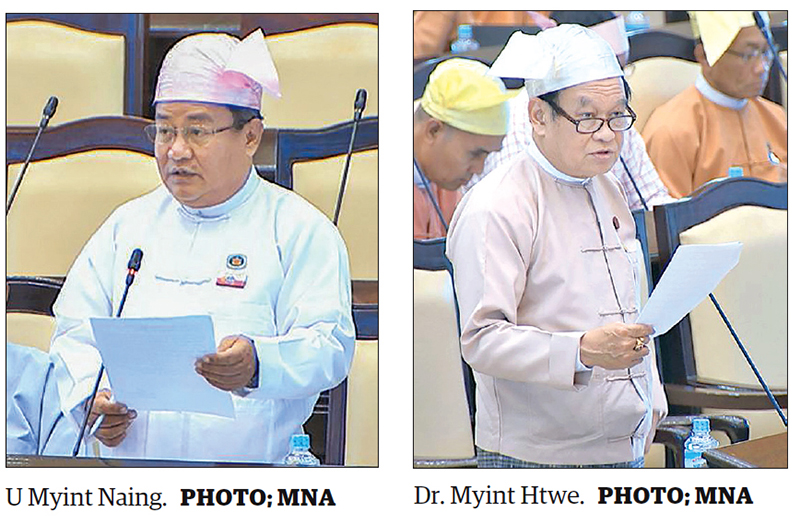 The eleventh regular session of the Second Amyotha Hluttaw held its seventh-day meeting at the Amyotha Hluttaw meeting hall yesterday morning, where asterisk-marked questions were answered, a receipt of a bill announced and a bill discussed.
QNA Session
In the question and answer session U Myint Naing of Rakhine State constituency 5 first asked if there is a plan to open a sub rural health centre in Rakhine State Kyauktaw Township, Kyeinchaung, Minthataung and Thayet Oat villages in fiscal year 2019-2020. Union Minister for Health and Sports Dr. Myint Htwe said a village sub rural health centre was planned in a place only four furlong from Kyeinchaung Village so in fact it can be said that one is being planned in Kyeinchaung Village. Minthataung Village has been expanded into sub rural health centre while Thatyet Oat Village is under Nga/Ta Paung Village sub-rural health centre which has a full strength of health personnel. As it is within reach of health care services there is no requirement to open a sub rural health clinic in Thayet Oat Village replied the Union Minister.
U Htay Oo of Yangon Region constituency 2 then asked if there is a plan to make the 420 ft. by 130 ft. empty land between No. 4 Basic Education High School, ward administrator office, library and drinking water pond in Yangon Region, Dagon Myothit (Seikkan) Township, Ward 93 into a sports ground for the ward. Union Minister for Health and Sports Dr. Myint Htwe said a letter from Yangon Region minister for development affairs had sent a letter on behalf of the Yangon Region government stating that the subject land is 22 plots of land in Ward 93 out of which two were already being registered as privately owned land. The remaining 20 plots are still empty but since it is already being allocated as living plots there is no plan to make this land into a sports ground for the ward replied the Union Minister. The Hluttaw representative should coordinate with Yangon Region government about this land and if an agreement is reached on the matter fund can be allocated in 2019-2020 budget for this said the Union Minister.
Similarly a question raised by U Bwe Khane of Chin State constituency 3 on upgrading a rural health centre in Chin State, Thantlang Township was answered by Union Minister for Health and Sports Dr. Myint Htwe.
Hluttaw informed on receipt of Innovation Copyright Bill
After the question and answer session Amyotha Hluttaw Speaker Mahn Win Khaing Than informed the Hluttaw on the receipt of Innovation Copyright Bill returned by Pyithu Hluttaw with amendments after it was approved and sent by Amyotha Hluttaw and announced for Hluttaw representatives who want to discuss the matter to register their
names.
Hluttaw discusses Child Rights Bill
Next Child Rights Bill was discussed by Tatmadaw representatives Maj. Kyaw Moe Thwin, Maj. Kyaw Soe Oo, Maj. Thein Lwin Htay, Maj. Zaw Win Oo, Maj. Htat Lin, Maj. Thein Bo Bo Htwe and Maj. Moe Han.
The eighth-day meeting of the eleventh regular session of the Second Amyotha Hluttaw will be held on 4 February, it is learnt.